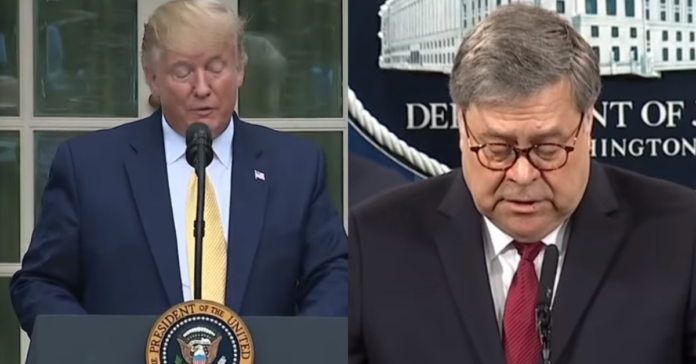 President Trump and Attorney General Bill Barr just made their move to end the migrant crisis gripping our southern border.

In a controversial move, the Democrats are already screaming and they will definitely sue,  Trump just issued a new rule that will basically end asylum from Central America.

The law is clear that we have a right and a duty to act to protect our country and Trump will. Barr says the order is legal and will survive any challenges in court.

From The Hill: According to a new rule published in the Federal Register, asylum seekers who pass through another country before reaching the U.S. will be ineligible for asylum when they reach the southern border.

The rule, which is expected to go into effect Tuesday, is likely to face a slew of legal challenges.

Attorney General William Barr defended the legality of the move in a statement Monday.

“This Rule is a lawful exercise of authority provided by Congress to restrict eligibility for asylum,” Barr said in the statement.

“The United States is a generous country but is being completely overwhelmed by the burdens associated with apprehending and processing hundreds of thousands of aliens along the southern border.”

Acting Department of Homeland Security Secretary Kevin McAleenan described the rule as an “interim” measure until Congress can act.

The move to restrict protections for most Central American asylum seekers is the latest effort by the Trump administration to attempt to curb the number of people crossing the U.S.–Mexico border.

The administration has attempted several times to place restrictions on the number of migrants who can apply for asylum per day and where they must await a resolution, but a number of those attempts have been blocked in court.