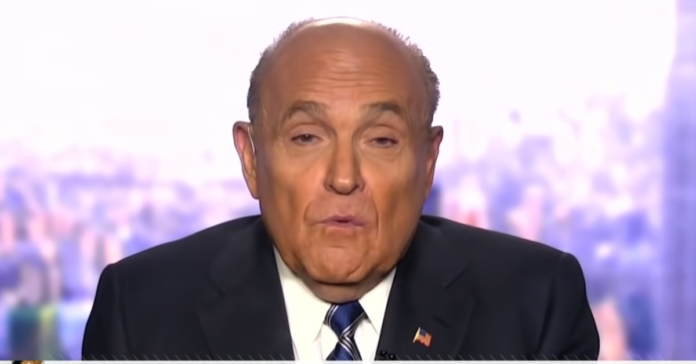 Now he is speaking out and it is not good news for Rudy Giuliani. Trump and Giuliani famously sparred over Rudy’s legal fees – Rudy confirmed he at one point asked Trump for $20,000 a day. Trump in turn told his team he would have to personally approve Rudy’s expenses.

Hopefully, Rudy got his money squared away because Byrne is now saying Rudy was drunk most of the time – almost every evening and many of the afternoons. If Trump confirms this, Rudy will have a hard time getting another dime from Trump.

Byrne wrote on his blog: “Over the next month and a half, a number of my colleagues interacted with Rudy from time to time, afternoons and evenings, and weekends.”

“Nearly all mentioned two things: the inordinate amount of attention he was paying to his daily podcast, and his drinking.”

“His own staffers were bringing it up to us. Something was clear to all who were around him: almost every evening, and many early afternoons, Rudy was shit-faced.”

“That, and his podcasts, were the only guarantees in Rudy’s life.”

“Overstock.com founder Patrick Byrne became one of the strangest characters of the last days of the Trump administration, visiting the White House in December, dressed in jeans and a hoodie, scarfing down meatballs, and bickering with Trump’s legal team and administration officials, as he, Flynn, and Powell together pitched the then-president on their democracy-thwarting schemes.

But now, with Trump’s dream of overturning the 2020 election in tatters, Byrne appears to be doing comparatively okay—and is blaming just about everyone else for President Biden’s win, turning his blog into the digital burn book of the Trump post-campaign.

“Almost every evening, and many early afternoons, Rudy was shit-faced,” Byrne blogged recently. “That, and his podcasts, were the only guarantees in Rudy’s life.”