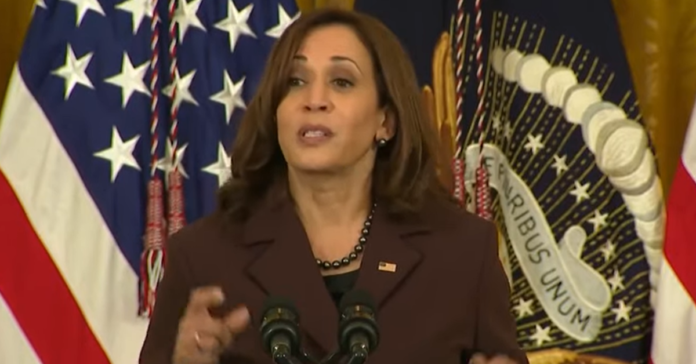 Vice President Kamala Harris has a dismal approval rating with the American people and most Dems are already wondering how they can win with her at the top of the ticket. Rumors have been swirling for months that big changes were coming and we are starting to see the first big DC shakeout of Biden’s term. With the Biden admin’s terrible record expect more heads to roll.

Symone Sanders, Vice President Kamala Harris’ chief spokesperson, is out and will be leaving the Biden administration at the end of the year.

“Symone has served honorably for three years,” a source told CNN. “The President and vice president are grateful for Symone’s service and advocacy for this White House. She is a valued member, a team player, and she will be missed. We are grateful to have her working through the end of the year.”

Sanders sent a letter to her colleagues:

“I’m so grateful to the VP for her vote of confidence from the very beginning and the opportunity to see what can be unburdened by what has been.

“I’m grateful for Tina and her leadership and her confidence as well.

“Every day, I arrived to the White House complex knowing our work made a tangible difference for Americans.

“I am immensely grateful and will miss working for her and with all of you.”

“Symone has been working at the highest levels and in an extraordinarily intense environment for three years for Joe Biden. And now also for Vice President Harris.

“When you look at the three years, two on the campaign, one in the White House, nobody can question her decision that she needs a break and it’s time to move on. And she’ll always be a member of the Biden-Harris family.”

Flournoy also sent a note to the VP’s team, saying, “Symone told the VP a couple months ago that she’d be leaving us at the end of the year. I’ve often said about her that no job is too big or too small for Symone.”

One of the most publicly recognizable individuals in the Biden administration, Sanders transitioned to Harris’ vice presidential team after serving as a Biden campaign senior adviser during the 2020 election.

In her post, she helped Harris juggle a tricky portfolio, including not just trying to address the root causes of migration from Northern Triangle countries and the federal push for voting rights, but also carrying the weight of being the nation’s first female vice president.

It wasn’t always smooth. Harris’ office has been beset by disorder, bad press, and, at times, internal frictions. Outside advisers complained that she was handed policy issues that were destined for failure and not given what she needed to succeed as vice president.

And, in recent weeks, chatter has grown increasingly loud that Harris wasn’t positioned well to be Biden’s heir apparent in 2028 or, if he opts not to run again, in 2024.

???Symone Sanders, the senior advisor and chief spokesperson for Vice President Kamala Harris, is expected to leave the White House at the end of the year, according to five administration officials familiar with the matter. w/ @ccadelago & @dlippman https://t.co/3OmfsZNs8c

Symone Sanders, a senior adviser and the chief spokesperson for VP Harris, is expected to leave her position at the end of the month, a White House official and four other sources familiar with the matter tell @NBCNews. https://t.co/nG1N33abYh