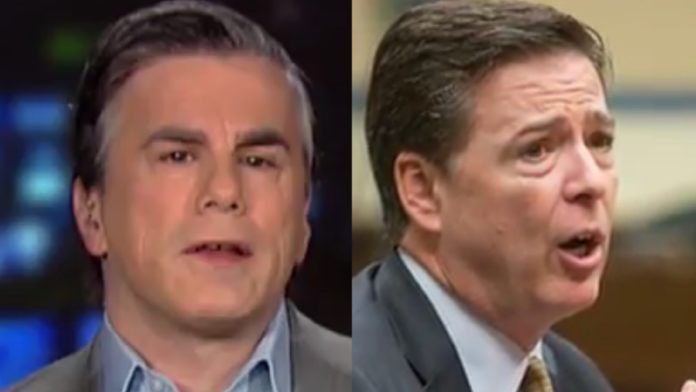 James Comey testified the other day and as promised his transcript was released to the public causing new concerns over his erratic behavior.

Comey again tried to have it both ways saying he helped torpedo Hillary and then tried to do the same to Trump out of a sense of obligation to do his job faithfully.

Sadly, for James Comey, he has no credibility left and he is just a shell of a showboat wandering around political purgatory looking for a home.

You will find none, Comey, for the left will never forgive you and neither will the right. You put Comey first, not America and not your duty to your oath of office, and it will haunt your legacy to be sure.

Tom Fitton, never one to suffer liberal fools, wasn’t buying Comey’s line and exposed him in a blistering takedown on Fox and Friends this morning. (See Video Below)

On “Fox & Friends First” Monday, Fitton said it’s particularly concerning that Comey “professed ignorance” on critical subjects, such as the anti-Trump dossier and what role it played in securing FISA warrants on Trump associates in the lead-up to the 2016 election.

He said that documents obtained by Judicial Watch suggest that officials used the unverified dossier — which was funded by the Hillary Clinton campaign and Democratic National Committee — to “mislead” the court to obtain surveillance warrants.

“They were told that the dossier, for instance, had origins in a political opposition to President Trump, but the court wasn’t told the Clinton campaign was behind it,” Fitton said.

“It looks like a smear operation by the Russians through the Clinton camp with the willing help of the FBI and, frankly, now the Mueller operation.”

What did we learn from Comey's closed-door testimony? That we can't trust him. https://t.co/HiyGd5VwL9

Over the weekend James Comey sat for a long Trump bashing interview where he more than proved Fitton’s point. From CNN:

“All of us should use every breath we have to make sure the lies stop on January 20, 2021,” Comey told an audience at the 92nd Street Y on New York City’s Upper East Side. He all but begged Democrats to set aside their ideological differences and nominate the person best suited to defeating Trump in an election.

“I understand the Democrats have important debates now over who their candidate should be,” Comey told MSNBC’s Nicolle Wallace, “but they have to win. They have to win.”

Over the course of more than an hour, Comey repeatedly derided Trump’s character, again likening the atmosphere around the President to what he saw in prosecuting mafia figures and suggested that Trump’s tweets could eventually amount to witness tampering. Asked if Trump might be an unindicted co-conspirator in some of the crimes recently described by special counsel Robert Mueller, Comey said he didn’t know, “but if he’s not there, he’s certainly close.”