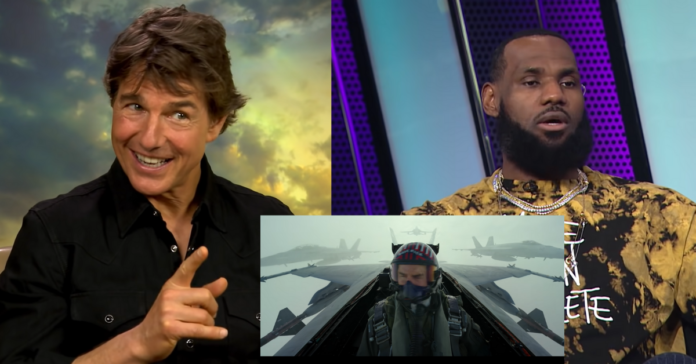 Tom Cruise put LeBron James and all the other celebrities who caved to China on notice because Tom should make nearly $100M from ‘Top Gun: Maverick’ despite the movie’s China ban. The smash hit passed $1B in total box office sales a few weeks ago and is still going strong.

Hong Kong film critic Ho Siu Bun said not caving to China on the Taiwan flag was ‘unprecedented.’ “Major film studios have never been shy about pandering to the Chinese market. And even if it is a simple scene, editing is very costly. So no one knows why they changed it back.”

According to Puck News: “It’s past $1.1 billion now, actually, and probably on track for $1.3 billion or so, all without a China release. Pretty amazing. I’ve previously reported that Cruise was paid $12.5 million upfront against 10 percent of first dollar gross, with escalators that increase his percentage at certain milestones. So that would mean Cruise starts getting backend once Paramount hits about $125 million in revenue (the studio generally takes in about half of box office gross; a little more domestically, a little less internationally).

“If the film gets to $1.3 billion, assuming an overall 50-50 split with theaters, that would give Cruise 10 percent of a little less than $600 million, minus some deductions off the top—so let’s say $55 million, just from theatrical. Plus his cut of home video, pay TV, streaming, and all the other revenue streams forever.

“At this level, it’s all pretty complex, so I surveyed a few top agents and lawyers, and most believe Cruise will reap about $80 million or $90 million based on the known deal and the film’s performance so far. But the payout could ultimately get to nine figures all-in for Cruise, given the long tail of this phenomenon,” Puck News reported.

Bill Maher admonished James and others recently for caving to China and now that Cruise showed them all you can stand tall and still make money hopefully the rest will follow.

“But the NBA has a television deal with China worth a billion-and-a-half dollars.

“So LeBron James said Morey needed to be ‘educated on the situation,’ the situation being, ‘I’ve got some shoes to sell.

“‘Kowtow’ is a Chinese word but boy, Americans have gotten good at it.

“That’s the deal China offers American companies and celebrities: We’ll give you access to our billion-plus consumers as long as you shut up about the whole police-state-genocide thing. John Cena took that deal.

A former ESPN anchor called out NBA superstar LeBron James for caving to China while slamming the media for blasting some of the country’s top golfers for joining a new Saudi-backed venture LIV Golf.

“It’s real easy to be pissed off and angry about LIV Golf and the Saudis. All I ask for is philosophical and ideological consistency. Apply it to China consistently, LeBron. LeBron, I think, has a responsibility, and an opportunity more importantly.

“And it’s easy for people to come to the conclusion that players, at a time when social voice and equity are very much a part of sports, mores o than ever before, here’s an opportunity to make a stand.

“If you are a billionaire, you can afford to perhaps make a stand and at least become educated.

“China has as many issues as any other country, and is the outrage tempered by the popularity of the sport and the dollars at stake?

“If you wanna get in a froth about LIV Golf, and you have every right to, take a pause, take a deep breath and look at China and see, should this outrage or this introspection and this attention extend to the NBA?” he said.