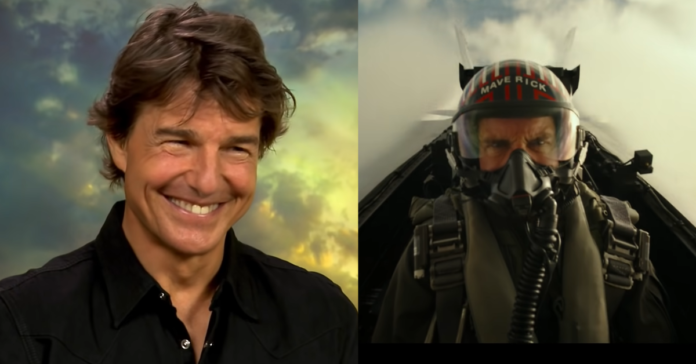 Tom Cruise is set to get a fairy tale ending to his pro-USA smash hit ‘Top Gun: Maverick.’ The sequel just passed the $900 million mark at the worldwide box office after another strong weekend of ticket sales.

‘Top Gun: Maverick’ is now only the third movie of the pandemic era to cross the $900 million mark. The movie has done $474.8 million domestically and $427.1 internationally for a total of $901.9 million.

Doctor Strange in the Multiverse of Madness earned around $950 million globally. Spider-Man: No Way Home made around $1.9 billion worldwide. But the news gets better for Tom Cruise. The movie is on track to pass the $1 billion mark and may do so over the Fourth of July weekend.

For a non-woke, pro-USA movie that refused to cave to China (and lost that massive market), to hit $1B in global sales is about as loud a message as you can send to Hollywood.

According to Variety, “Even without playing in China or Russia, the $1 billion mark looks to be within reach.

“That would be notable because only one other Hollywood movie, Sony’s “Spider-Man: No Way Home,” has crushed that particular benchmark in COVID times.”

According to the Hollywood Reporter:

“Top Gun: Maverick is also Paramount’s biggest live-action movie in 15 markets, including the U.K., Australia, France and Brazil, as well as the studio’s highest-grossing original release at the domestic box office behind Titanic.

“Top Gun: Maverick has been buoyed by enviable word of mouth. Critics blessed the long-awaited sequel with a 96 percent score on Rotten Tomatoes, while moviegoers awarded the film with a coveted A+ CinemaScore.”

This would be the first movie of Tom Cruise’s career that hit $1 billion in sales.