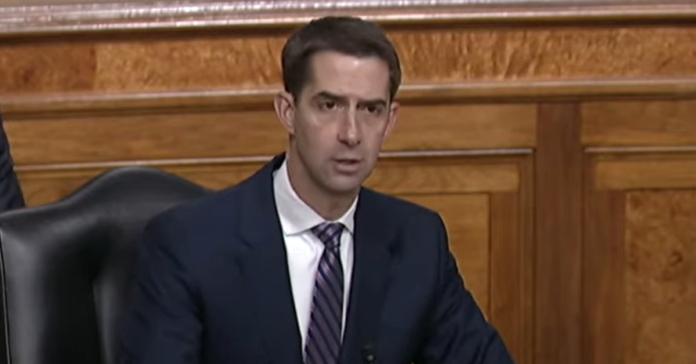 Senator Tom Cotton called out President Joe Biden and the Dems in Congress who seem close to passing some large spending bills. The Dems have been fighting amongst themselves but are inching towards a deal and most expect them to, in their desperation, pass something.

Tom wrote, “Only 42% of Americans approve of Joe Biden’s presidency and as few as 15% approve of Chuck Schumer and Nancy Pelosi’s Congress. The reason for this abysmal approval rating is simple; Democrats in Washington do not represent the interests of the American people.

“Instead, they appear hellbent on bankrupting our government, derailing our economy, and dissolving our border. Their multitrillion-dollar spending bill would do all three.

“No provision is more pernicious than the immigration proposal pushed by Sen. Dick Durbin, D-Ill., who has tried to force amnesty for millions of illegal immigrants into this bill not once, not twice, but three times. The Senate parliamentarian has ruled two of his proposals out of order, and we are awaiting her ruling on Sen. Durbin’s third attempt to bypass the Senate filibuster.

“His most recent proposal would amount to nothing less than DACA-For-All. It would grant full public benefits to millions of illegal aliens and grant five-year “amnesty passes” for illegal border crossers.

“These amnesty passes could be renewed in perpetuity, until Congress is forced to make this amnesty plan permanent. This proposal would cost the American people unknown billions of dollars and would add to our nearly $30 trillion national debt.

It would cost money we don’t have and take away jobs that we cannot afford to lose. Once legalized, these millions of illegal aliens will naturally seek legitimate employment and take positions that would otherwise be filled by American citizens and lawful immigrants. Working-class Americans would disproportionately suffer as a result of this policy.

“The current draft of the Democrat’s bill also includes a nearly unprecedented assault on the livelihoods of American tech workers.

“In service of their big money donors, Democrats intend to authorize green cards for hundreds of thousands of foreign tech workers. On day one, Democrats want to open the floodgates to 200,000 such workers.

These proposals, irresponsible in normal times, are insane under current circumstances. In a painfully sluggish economy wracked by inflation, supply chain shortages and rising energy prices, the last thing Americans need is a massive influx of foreign workers taking jobs and opportunities.

“The Democrats’ DACA-For-All and reparation proposals would exacerbate the worst border crisis in American history.

“Last year, a record 1.7 million illegal aliens were encountered at the border and hundreds of thousands of additional illegal immigrants escaped into the interior of our country.

“These amnesty and reparation proposals would cause a further meltdown at the border by sending the unmistakable message that crime pays.

“Amnesty would also worsen our nation’s spiraling drug crisis, which starts at the Rio Grande and flows into every city, town and community in our country.

“The majority of deadly narcotics sold on street corners in the United States are smuggled across the southern border. Last year alone, the Border Patrol seized nearly three tons of meth and enough fentanyl to kill over 100 million people.

“I am urging my colleagues to join with me and kill this bill,” he wrote.