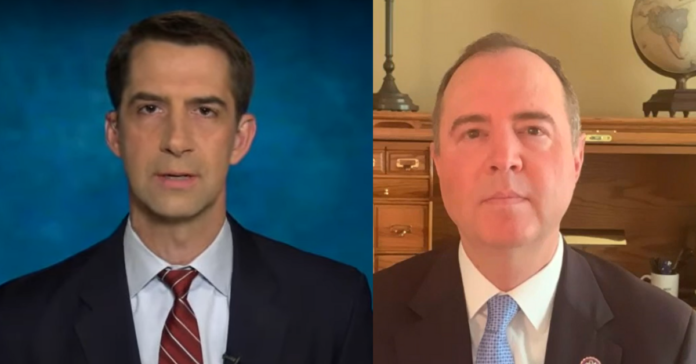 Sen. Tom Cotton dropped the hammer on Adam Schiff and accused him of being a huge leaker in D.C. Cotton told Lisa Boothe on her podcast that the scandalous leaks over the last few years were “probably as likely” to have come from Democrats as the U.S. intelligence community.

Cotton then singled out Adam Schiff and put the California Democrat on notice saying, “Adam Schiff, I’m looking right at you right now as a potential source for that.”

“Just last week, the Biden administration presumably authorized that information to be released from the intelligence community. They had low — only low to moderate confidence,” said Cotton of the Russian bounty story.

That’s pretty low, I got to tell you, just from a tradecraft perspective,” he added.

“I can’t say that those leaks last summer came from the intelligence community itself, but I think it’s probably as likely that they came from Democrats in Congress who had seen those documents and misrepresented them through the media,” he said before singling out Schiff.

“Adam Schiff, I’m looking right at you right now as a potential source for that,” Cotton said.

“Yet another false and baseless claim by Tom Cotton — you would think he would know better by now,” Schiff spokesman Patrick Boland said.

“Americans are outraged by reports that Russia offered bounties on U.S. troops,” Adam said in July.

“The only American who isn’t? Donald Trump. Trump is again taking the Kremlin’s side and calling it a hoax.

“This is no hoax, Mr. President. But it is time you put our troops first, instead of Putin.”

“I haven’t. My staff hasn’t. I can’t speak for what all the members of the committee have done or not done, including a lot of the Republican members,” Schiff told CNN about the leaks.

"Sen. Tom Cotton told Lisa Boothe on her podcast, The Truth with Lisa Boothe, that the leaks were "probably as likely" to have come from Democrats in Congress as the U.S. intelligence community and specifically name-dropped Schiff, a California Democrat." https://t.co/AyTAD5fe4d

Lebron James is inciting violence against an Ohio police officer.

This is disgraceful and dangerous.