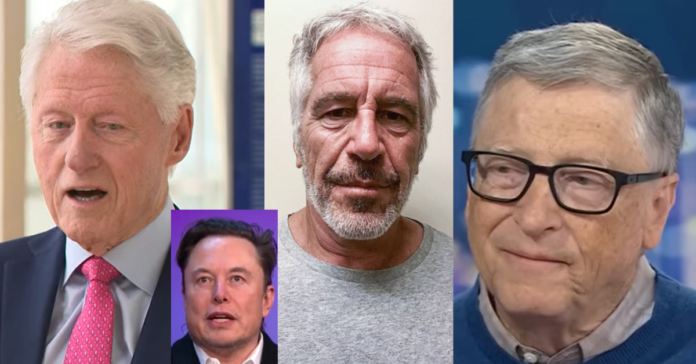 Tesla CEO Elon Musk caused a stir yesterday when he posted a meme demanding answers about Jeffrey Epstein’s clients. The post said ‘Things I’ll never see in my life’ with pictures of a fire-breathing dragon, a dinosaur, a unicorn, and the Epstein/Maxwell client list. Musk added the caption: “Only thing more remarkable than DOJ not leaking the list is that no one in the media cares. Doesn’t that seem odd?”

And one brave reporter who spent years investigating Jeffrey Epstein answered Elon’s challenge. Adam Davidson explained why he can’t publish what he knows about these powerful friends and clients of Epstein and why some victims won’t come forward. He says they all knew even if they didn’t participate in the sex and that a court can presume them innocent but we should not.

He said: “I wrote something provocative about how I know stuff about Jeffrey Epstein and can’t publish it.  I’ll do my best to explain and reveal here. It provides, I think, a good lesson in why it is hard to publish stories about bad things done by the rich and powerful:

Just about everything I know has been published somewhere. It’s in books or articles or interviews with victims or revealed in depositions.

And, I think, our podcast, Broken, went further than many in revealing scumbaggery.

But, yes, there are things I believe, with good evidence, to be true that I feel I cannot publish.

These fall into a few categories:

We spoke to dozens of Epstein’s victims and dozens of their lawyers.

Many are, simply, terrified and don’t want to talk at all.

But here is what I feel confident in saying:

If someone spent any amount of time with Jeffrey Epstein, at a minimum they saw him physically touching girls in provocative ways and rather gleefully showing off his ability to do so.

Others are willing to talk off the record and will confirm things others said, but beg us not to reveal their names/info.

Others are represented by lawyers who want to win settlements and don’t let them all.

We chose to respect any victim’s decision.

We had to rely on the very few victims who were willing to talk publicly. This is why

@VRSVirginia is so brave. Pretty much every thing she told us was confirmed by others, off the record. But she is rare in being public.

The biggest issue is the victims we never spoke with.

Epstein reportedly raped up to 3 girls a day for years. Most came once or just a few times. Their names are not known by anyone.

That’s thousands of victims who are invisible.

The next circle of sources are the enablers. Over the decades of abuse, Epstein had hundreds of staffers–pilots, house staff, chefs, assistants–the vast majority will never speak or will offer weak denials or will only speak through lawyers.

We covered one of those enablers, Adam Perry Lang, quite well, I thought: he was Epstein’s chef for years and has become a Hollywood celeb chef, best friend of Jimmy Kimmel.

A few of these enablers would confirm details off the record.

Then there is a huge group of people–those who witnessed Epstein and fancy functions. They saw him with teenagers at scientific conferences or sitting on his knee at dinner parties.

A few did talk to us–totally off the record.

Lastly, there are the people who (allegedly!) either had sex with children or were around when others were doing so.

They are all rich and powerful and simply deny and refer to their lawyers often with clear insistence that they will sue.

The result of all of this is that for most of the claims, there is one witness willing to go on record. That witness, more often than not, is

I have full confidence in her recollections. We spent ~two years checking every thing she said and never found a lie.

But courts and the public are not kind to single-source he-said/she-said cases.

Virginia has already faced down and won against some very powerful people.

But this is an absurd amount of weight to put on one person’s shoulders.

So, I am not protecting the men who (I feel fairly confident) raped children or watched as others did so. Fuck those guys.

I am honoring their victims’ requests.

Like all of you, I have hoped it would all come out by now. I’m shocked it hasn’t.

But here is what I feel confident in saying:

If someone spent any amount of time with Jeffrey Epstein, at a minimum they saw him physically touching girls in provocative ways and rather gleefully showing off his ability to do so.

More than likely, they were offered sex with whatever their preference was (Epstein did employ, abuse, and traffic women who weren’t underage). And many did have sex with girls or women.

So, ALL the people who spent real time with Epstein were–at best!–witnesses to the almost certain rape of children.

And had a high likelihood that they engaged in illegal sex acts.

We all should presume guilt.

They saw him with those children. They saw naked photos on his walls and many saw naked children around his pool.

They knew. Yes, of course, many participated. But ALL  knew.

I am not able to say the names of people I think participated without betraying victims.

But these men should not be invited into polite society.

They should not be celebrated on TV shows as experts on Covid or international relations or whatever.

Bill Gates is now in week 5 of his reputation recovery tour and a compliant press is helping him.

Most ask nothing about his relationship with Jeffrey Epstein, focusing, instead on his oracle-status on Covid. The few who do ask about Epstein, accept weak non-answers.

Gates’s argument is that Epstein was going to help him raise a special billion+-dollar fund. That is not credible. At the time, Epstein was a pariah with ~$500m of wealth and little of his former influence.

More than likely, they were offered sex with whatever their preference was (Epstein did employ, abuse, and traffic women who weren't underage). And many did have sex with girls or women.

I’d love a good investigative reporter to seek info about this.

A potential gift that huge–one that would lead to Gates spending at least 4 evenings with Epstein–would have a huge paper trail with a lot of research from the development office.

And until Gates produces the evidence, let’s not laud him.

Can you explain your friendship with Jeffrey Epstein?

You said he helped you make connections. Who did he know that you had no other access to?

Why did you spend so much time with him?

What marriage advice did he give you?

What else did you know about him?”

So, ALL the people who spent real time with Epstein were–at best!–witnesses to the almost certain rape of children.

And had a high likelihood that they engaged in illegal sex acts.

We all should presume guilt.