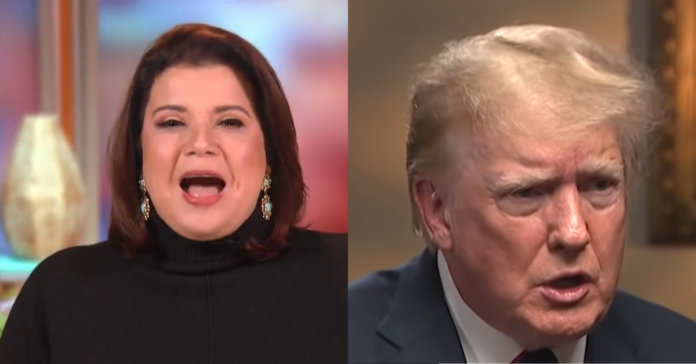 The media is gearing up for the coverage of Jan 6 but a co-host on The View gave up the game before the corporate media can even start playing their games and spin their narratives.

The corporate media will overwhelm you with stories that 60% of Republicans do not believe Joe Biden was legitimately elected in 2020. They will call this a crisis of our democracy and demand action from social media companies to censor conservative voices because of their hysteria.

But what the corporate media will not report, and thankfully Ana Navarro let the cat out of the bag so they cannot pretend it did not happen, is that in 2017 60% of Democrats believed Donald Trump was not legitimately elected.

According to Fox News, “Polling in 2017 found that two-thirds of Democratic respondents did not believe Trump was legitimately elected to the White House, and the Russia collusion narrative dominated media coverage of his term in office.

“Ultimately, a sprawling federal investigation found no proof of coordination between the Trump campaign and the Kremlin to interfere in the 2016 election.”

Ana Navarro said on ABC with no repercussions, no scandal and no censorship:

“We’ve seen Republicans bow down to Trump because they want to stay elected, and because they’re putting their own positions over democracy and over defending the U.S. institution of a legitimate election.

“Look, I felt that Donald Trump had not been legitimately elected.

“I thought he’d gotten help from the Russians.

“But you know what? It would have never occurred to me to take up arms against Donald Trump.

“That’s just not what we do in America.

“Our weapon of choice is voting, is democracy, it’s the ballot.

“And so I hope that people remember January 6th.

“You know how? By registering to vote,” she said.

AMERICA GRAPPLES WITH DENIAL OVER JAN. 6 EVENTS: As we approach the one year anniversary of the Capitol attack, @JoyVBehar, @sunny, @ananavarro, and @YNB discuss the impact of those who do not believe the details revealed by the House Jan. 6 committee. https://t.co/om0CPHpGPj pic.twitter.com/7TdrHedUna

"Trump has ushered in this 'alternative facts' decade at this point," @sunny says as some continue to question the details over the events of Jan. 6.

“I’m terrified for the future of the democracy in this country if that’s what people are really believing.” pic.twitter.com/oPJFSi4mkc