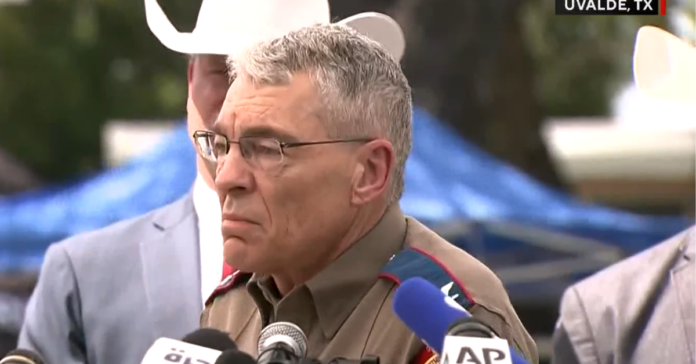 Steven McCraw, director of Texas Department of Public Safety, came clean about the Texas tragedy saying the incident commander in charge of the initial response made the ‘wrong decision’ not to breach the classroom.

“From the benefit of hindsight where I’m sitting now, of course, it was not the right decision,” McCraw said. “It was a wrong decision. There’s no excuse for that. But again, I wasn’t there, but I’m just telling you from what we know.

“We believe there should have been an entry as soon as you can. When there’s an active shooter, the rules change. Forget about me or the officers and stuff like that.

“We take an oath to uphold the law and protect people and anytime something tragic like this, we want to know why it happened, and if we can do better next time. There’s a bottom line and call it like it is. It is tragic.”

According to KHOU, this is the updated timeline:

11:28 a.m. – Ramos crashes into a ditch near the school. A teacher runs to a classroom to retrieve their phone. The exterior door remains propped open. Two people from a nearby funeral home approach Ramos’ crashed truck to try and help, but they see him with a gun and backpack. The two people run back to the funeral home as Ramos began shooting at them. They were not hit.

11:31 a.m. – Gunman starts shooting at Robb Elementary School while police officers arrive at the funeral home. A Uvalde CISD patrol officer arrived at the school and drove past the shooter, who was hiding behind a car.

11:33 a.m. – Gunman enters school through the propped open door and enters either room 111 or 112 and starts shooting. He fired more than 100 rounds at that time.

11:35 a.m. – Three Uvalde Police officers enter the same door the gunman entered. They were later followed by three more officers and a sheriff’s deputy. Two of the first officers through the door received grazing bullet wounds from bullets fired through the closed door.

12:03 p.m. – Agents continue to arrive. As many as 19 law enforcement officers are now in the school hallway.

12:21 p.m. – Gunman fires again and is believed to be at the door. Law enforcement moved down the hallway.

12:50 p.m. – Law enforcement officers breached the door using keys they were able to get from a janitor because both rooms 111 and 112 were locked.