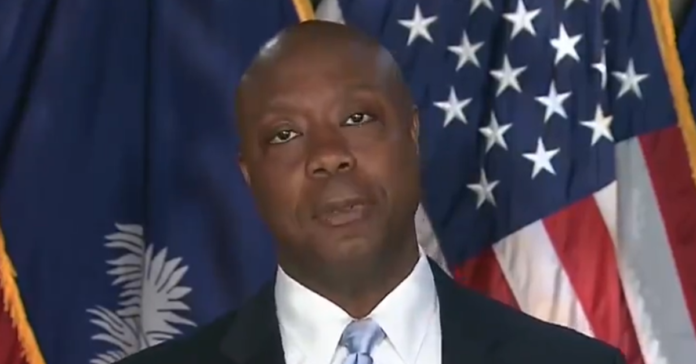 “I am deeply and sincerely sorry for my inappropriate and hurtful use of the racist term I used to describe Sen. Tim Scott on my personal Facebook page. It was insensitive, and I have embarrassed myself and my party by its use,” Gary O’Connor said.

“As a result, I feel compelled to offer my resignation as chair of the Lamar County Democratic Party for consideration by the County Executive Committee,” he added.

“I had hoped that Scott might show some common sense, but it seems clear he is little more than an oreo with no real principles,” the post read.

“Gary O’Connor’s comment against Senator Tim Scott is abhorrent, insulting, and unforgivable. Both he and the entire Lamar County Democratic Party should be ashamed of this racist behavior,” said Fallon.

Fallon called on O’Connor to apologize and resign in his release and asked the Texas Democratic Party as well as the NAACP to denounce the racist statement.

Scott has faced a flurry of racial attacks from progressives after delivering his rebuttal to Biden’s address to Congress last week.

I have a gift — and a message — for #LamarCountyDemocrats Chair Gary O'Connor, and the @texasdemocrats. pic.twitter.com/9q9d3ntRY7

This is disgusting, hateful, and completely unacceptable.