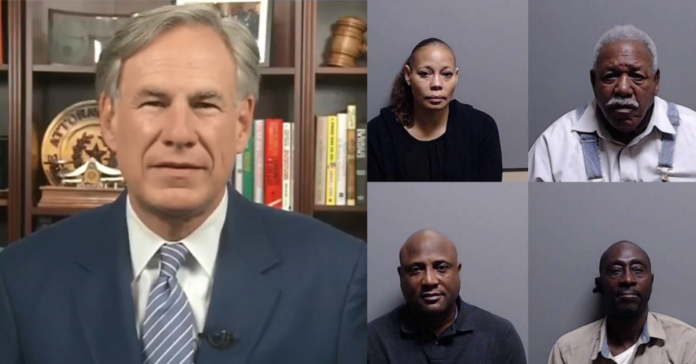 Texas Attorney General Ken Paxton announced four arrests with a voter fraud scheme and the suspects were hit with dozens of felony charges in connection with a scheme during the 2018 Democratic primary elections in Gregg County.

“It is an unfortunate reality that elections can be stolen outright by mail ballot fraud,” Paxton said in a statement.

“Election fraud, particularly an organized mail ballot fraud scheme orchestrated by political operatives, is an affront to democracy and results in voter disenfranchisement and corruption at the highest level.”

“To increase the pool of ballots needed to swing the race in Brown’s favor, the group targeted young, able-bodied voters to cast ballots by mail by fraudulently claiming the voters were ‘disabled,’ in most cases without the voters’ knowledge or consent,” Paxton’s office alleged.

The four have been charged with engaging in organized election fraud.

The charges stem from allegations of vote harvesting made during the 2018 election race for Gregg County Pct. 4 County Commissioner between Brown and Kasha Williams.

Brown squeaked by Williams in the election by just four votes.

An allegation of impropriety lodged by the Rev. D.J. Nelson, a Pct. 4 voter, launched an investigation into the race.

“In the state, 9 percent of the ballots cast were absentee,” Nelson told KETK at the time. “So 9 percent statewide, but in Gregg County it was 32 percent.”

That race drew more mail-in ballots by far than the county’s other three precincts combined. It also seemed to have an unusually high percentage of people younger than 65 who claimed a disability as their reason for voting by mail.

The 787 mail-in ballots tallied in the March primary represent more than 37 percent of votes cast in the Brown/Williams contest, which Brown won by five votes. Of the 787 ballot applications, at least 226 claimed a disability — almost 29 percent.

Texas Attorney General Ken Paxton’s office is accusing Brown, Jackson, Burns, and Ward of being “ballot harvesters,” or people who deliver mail-in votes for a candidate for money.

The indictment alleges that the group targeted young, able-bodied voters to cast ballots by mail by fraudulently claiming they were disabled in order to increase the pool of ballots needed to swing the race in Brown’s favor.

“During the 2018 race between Kasha Williams and Mr. Brown, some concerning numbers were released.

“In all other Gregg County precincts, a combined total of 12 mail ballot applications were requested based on a voter’s disability. In Precinct 4, voters requested 366 ballots based on the voters’ disabilities. While Williams defeated Brown by more than 20 points in in-person early voting and election day ballots, 73% of these 366 mail ballot votes were cast for Brown, who ultimately won the election by five votes. According to county elections data, 69% percent of mail ballot applications for Brown’s race were marked as being assisted by a third-party.”