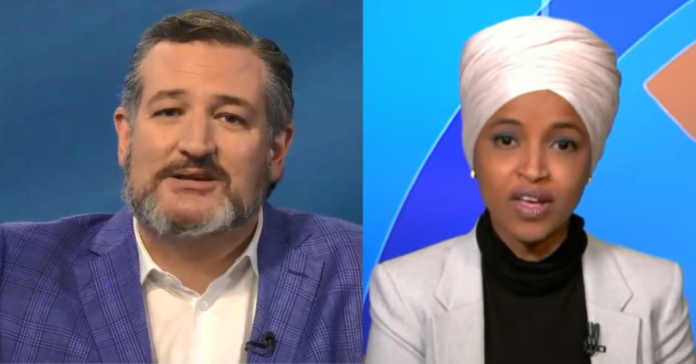 Sen. Ted Cruz (R-TX) ripped Rep. Ilhan Omar (D-MN) today after she accused Israel of committing terrorist acts amid rising tensions in the conflict that has troubled that region for a long, long time.

Omar said Israel’s retaliatory strikes, Hamas claimed it fired hundreds of rockets into Israel, were an act of terrorism. The Israel Defense Forces (IDF) hit over 130 Hamas military targets in response to the rocket attacks.

“Israeli air strikes killing civilians in Gaza is an act of terrorism. Palestinians deserve protection. Unlike Israel, missile defense programs, such as Iron Dome, don’t exist to protect Palestinian civilians,” Omar said. “It’s unconscionable to not condemn these attacks on the week of Eid.”

“Many will tell you Israel has a right to defend itself, to safety and security, but are silent on whether Palestinians have those rights too. Until we can defend the rights of Palestinians just as we do Israelis, we have no leg to stand on when it comes to justice or peace,” she added.

Ted Cruz said: “Why is a Member of Congress acting as the press secretary for Hamas? Does Biden agree?”

A salvo of rockets hit homes in the Israeli cities of Ashkelon and Ashdod on Tuesday, but many of the projectiles launched either fell short and landed in Gaza or were intercepted by Israel’s advanced “Iron Dome” missile defense system.

Israeli emergency response officials said two women were killed in the barrage on Tuesday afternoon and at least one more was left in critical condition. Earlier authorities said at least 10 people had been treated for unspecified injuries in Ashkelon and Ashdod.

Hamas’ military wing, the al-Qassam Brigades, claimed to have launched 137 rockets at the two southern Israeli cities within just five minutes on Tuesday, adding in a menacing message online: “We’ve still got more up our sleeves.”

The Israeli military’s response to the rocket attacks began swiftly on Monday, and officials said 15 militants were killed in the air and drone strikes carried out in Gaza.

On Tuesday, Israel’s Prime Minister Benjamin Netanyahu — who is mired in both legal and political dogfights with domestic foes — said that following “a situational assessment, it was decided that both the might of the attacks and the frequency of the attacks will be increased” on Gaza.

“Hamas will receive blows now that it didn’t expect,” the premier warned.

His government has blamed the civilian deaths in the Palestinian territory on Hamas, which it regularly accuses of using human shields.

The al-Qassam Brigades said on Tuesday that Israel had hit “a target where our mujahideen were present amid measures undertaken by the group to raise our readiness to repel the aggression.” It said some of its fighters were killed and others were missing following the strike.

Islamic Jihad, another one of the main Palestinian armed groups in Gaza, said two of its top commanders were killed in Israeli strikes. Members of the group told the AFP news agency that Israeli missiles also “wounded eight people, including a woman and her two children,” as they slammed into a residential area in crowded Gaza City, killing the commanders.

There were calls for calm overnight, with the U.S. and the U.K. condemning the Palestinian rocket attacks in particular and the United Nations voicing “serious concern” over the escalation in general.

Why is a Member of Congress acting as the press secretary for Hamas?