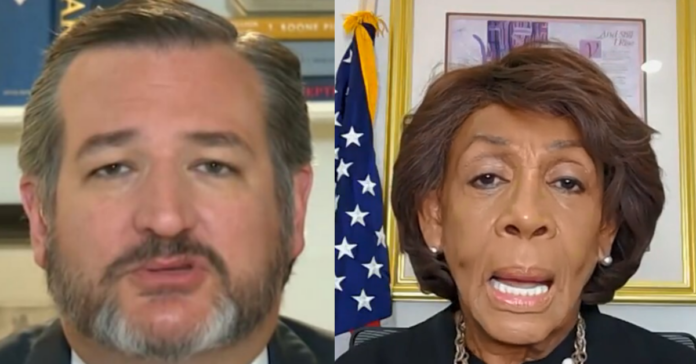 Sen. Ted Cruz, R-Texas put Maxine Waters on notice after she went viral over comments she made in Minnesota about the Derek Chauvin trial. Ted accused her of “actively encouraging riots and violence” on Twitter.

Ted wrote: “Democrats actively encouraging riots & violence, they want to tear us apart,” before quoting an article he linked to: “’We gotta stay on the street,’ Waters was recorded saying, adding that protesters needed ‘to get more confrontational’ & they should ignore the curfew in place.”

“I’m going to fight with all of the people who stand for justice,” Waters told reporters. “We’ve got to get justice in this country and we cannot allow these killings to continue.”

“We’ve got to fight for justice,” said.

“This is a very difficult time in the history of this country,” Waters said. “We have to let people know that we are not going to be satisfied unless we get justice in these cases.”

This is not the first time Republicans have accused Waters of stoking confrontations. In 2018, she was on video and said, “Let’s make sure we show up whenever we have to show up.”

“And if you see anybody from that Cabinet in a restaurant, in a department store, at a gasoline station, you get out and you create a crowd. And you push back on them. And you tell them they’re not welcome anymore, anywhere. We’ve to get the children connected to their parents,” she said.

Her office did not immediately respond to an after-hours email from Fox News.

Waters’ recent comment has been seized by Republicans and criticized as reckless considering the unrest that has broken out in the area and the city’s preparation for the Chauvin trial verdict.

They want to tear us apart.

“'We gotta stay on the street,' Waters was recorded saying, adding that protesters needed 'to get more confrontational' & they should ignore the curfew in place.” https://t.co/PWW7YNDbKR

Maxine Waters is marching in Brooklyn Center tonight and told people to take to the streets if Chauvin is acquitted pic.twitter.com/RemfvCCLAn

Maxine Waters is inciting violence in Minneapolis — just as she has incited it in the past. If Speaker Pelosi doesn’t act against this dangerous rhetoric, I will bring action this week.