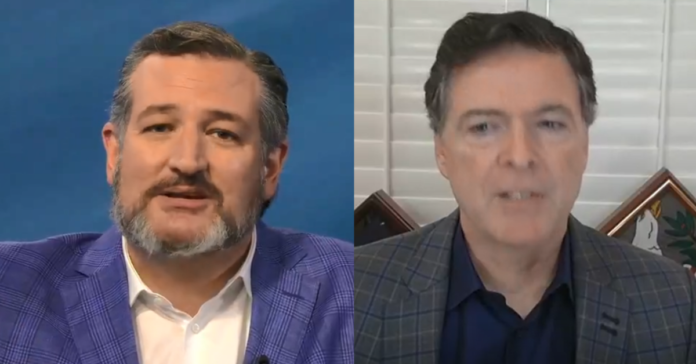 Ted Cruz just embarrassed the hapless James Comey in front of the entire nation today calling him deliberately corrupt. (Watch the video below)

“And I’m going to make a final point because my time is expired. This investigation of the president was corrupt, the FBI and the department of justice were politicized and weaponized and in my opinion, there are only two possibilities,” Ted said.

Then he looked at Comey and dropped the hammer: “That you were deliberately corrupt or woefully incompetent and I don’t believe you were incompetent.”

“This is done severe damage to the professionals and the honorable men and women at the FBI because law enforcement should not be used as a political weapon. And that the legacy you’ve left.”

From Fox News play by play:

Cruz tells Comey the investigation was corrupt and the DOJ was weaponized.

He says there are two possibilities: ‘You were either deliberately corrupt or woefully incompetent –and I don’t believe you were incompetent.”

Cruz grilling Comey now, asking Comey why he didn’t alert the FISA warrant that he was aware the dossier was funded by the DNC.

Comey says that it was included to the FISA court that it could have been politically motivated.

“Your recollection is false,” Cruz says, before disputing that saying it could be politically biased is different from saying it was funded by the Democratic National Committee.

Graham says “everything Trump got looked at” but asks if there was any suggestion that the other side was involved in creating a Trump-Russia connection.

He notes Christopher Steele’s anti-Trump bias, and says there are intercepts that the Clinton campaign was concocting a strategy to tie Trump to Russia, and asks if the FBI looked at that. He notes that Comey has said he doesn’t remember that.

“If there’s suggestions the other side is up to no good, we just ignore it,” he says, accusing the FBI of holding a two-tiered system and a “completely different standard” for the Clinton campaign.

Comey is asked if, knowing what he knows now, he would still have signed the warrant application against Carter Page.

“No I would want a much more complete understanding,” Comey says. Later says he would have asked for a “much more fuller discus

Sen. Leahy asks Comey if he has felt the way he feels about Trump — about possible Russian influence over him — about any other U.S. president.

Comey say he has not, and says that he doesn’t know if the Russians “have something” on Trump, but says his conduct on Russia is difficult to explain any other way.

He says the question is “deepened’ by recent revelations in the New York Times about possible indebtedness.