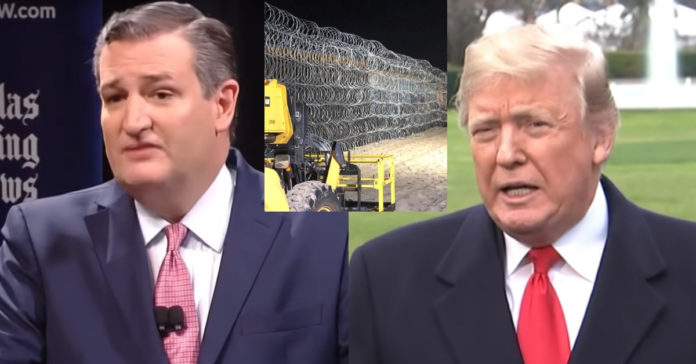 Ted Cruz is making his move and has a new plan to fully fund President Trump’s much-needed border wall.

The estimate is Trump needs $25 million and Cruz says his new bill will more than net that amount.

Plus, the bill will crack down on certain loopholes that have been abused and are costing us a tremendous amount of money every year.

Ted and his GOP Senators who support the bill have discovered an ingenious way to fully pay for the wall and tightening up our welfare system and getting rid of serious fraud and abuse.

From The Hill:Republican senators have introduced legislation to fully fund President Trump’s request of $25 billion for the U.S.-Mexico border wall.

To pay for the border wall, the Republicans propose to crack down on benefits for undocumented immigrants, including requiring that parents have a Social Security number to claim refundable tax credits, requiring any welfare applicants to prove they are a citizen and increasing minimum fines on individuals who cross the border illegally or overstay visas.

“If you want to receive food stamps and other benefits, then you should prove your citizenship. If you cross the border illegally or overstay your visit to this country, then you should pay a stiff penalty,” Sen. John Kennedy (R-La.) added.

In addition to Kennedy and Cruz, the bill was introduced by Sens. James Inhofe (R-Okla.) and Mike Rounds (R-S.D.).

Ted has introduced similar bills in the past and couldn’t get traction but this is a new year and we have a new Congress coming in.

One that is going to fight Trump tooth and nail on everything and so this bill while a longshot, could be a simple opening move by the GOP in what will be the fight of the next year: How much will go to fund the wall.

Chuck Schumer has agreed to $1.6 billion while Nancy Pelosi is only offering crumbs towards building the wall.