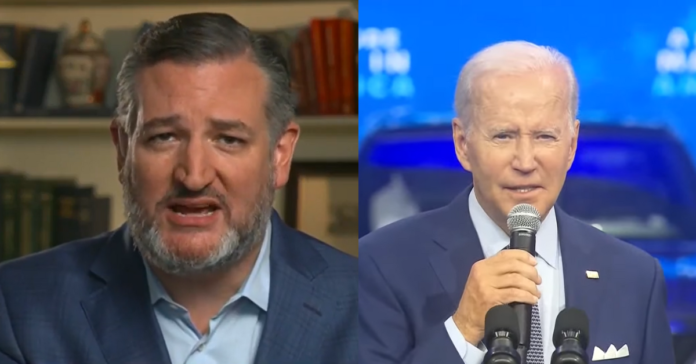 Ted Cruz dropped the hammer on President Joe Biden calling him ‘the biggest human trafficker on the face of the planet’ because of all the migrants the federal government has shipped around the country often in the dead of night.

Cruz said: “Today has really illustrated what screaming hypocrites the Democrats are. The entire corrupt corporate media, they don’t believe a word they said. Every word out of their mouth is a complete and utter lie.

“You know, the Democrats did not think it was a humanitarian crisis when we pulled over 50 bodies and body bags out of a truck in Texas of illegal immigrants who died because the smugglers let them die of heat exposure.

“And yet suddenly, 50 illegal immigrants show up in lily white Martha’s Vineyard, where rich liberals and billionaires sip Chardonnay.

“And it is World War III.

“They lose their stuff all over the place. And it just shows what utter nonsense it was.

“Right now, the biggest human trafficker on the face of the planet is Joseph Robinette Biden Jr.

“He has transported hundreds of thousands, millions of illegal aliens populating them now, putting many of them in Red states.

“You know, all of the folks on Martha’s Vineyard happily voted for Joe Biden.

“Instead, what does he do? He lies to the American people.

“He sends Karine Jean-Pierre out to claim nobody is crossing the border illegally.

“It’s a flat out lie, and all of the docile little sheep in the press room, they baa like sheep, and they ignore the fact that she’s lying to the American people.

“The media needs to cover her lies.

“And this outrage needs to stop because you know what, these blue governors and mayors are right.

“But it’s not just a crisis when it’s the millionaires who are inconvenienced,” he said.