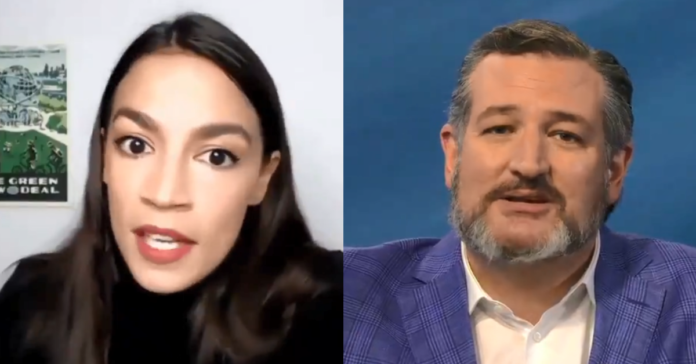 Wall Street hedge funds got beat in a bad way when their short trades went south. With no government bailout in sight they did the unthinkable. They closed ranks and literally changed the game to stop the bleeding and in doing so crossed many ethical and possibly legal lines.

Congress and Biden were too quiet but they must have got the message because we now have AOC and Ted Cruz teaming up to call for hearings into what in the hell went on here because the market is either free or it is not.

“This is unacceptable. We now need to know more about Robinhood’s decision to block retail investors from purchasing stock while hedge funds are freely able to trade the stock as they see fit. As a member of the Financial Services Cmte, I’d support a hearing if necessary,” AOC said while Ted responded, “fully agree.”

What they’re saying: Elected officials from both parties began responding on Thursday to the news that Robinhood was only allowing users to sell the Reddit-driven stocks, with several calling for hearings on the matter.

Rep. Alexandria Ocasio-Cortez (D-N.Y.) tweeted: “This is unacceptable. We now need to know more about Robinhood’s decision to block retail investors from purchasing stock while hedge funds are freely able to trade the stock as they see fit. As a member of the Financial Services Cmte, I’d support a hearing if necessary.”

Donald Trump Jr., who is not elected but remains a popular figure within his father’s base, tweeted: “It took less than a day for big tech, big government and the corporate media to spring into action and begin colluding to protect their hedge fund buddies on Wall Street. This is what a rigged system looks like, folks!”

Where it stands: Shares of GameStop peaked at $469 before plummeting down $126 at around 11:30 am. It began to recover again around noon. A number of trading platforms said they were experiencing device disruptions.

Robinhood shut down the buying feature for shares of GameStop (GME) and other hot stocks on its app Thursday after a wild week of trading: GameStop stock was $64 at Monday’s open, rocketing to $347 at Wednesday’s close, a 437% gain.

“We continuously monitor the markets and make changes where necessary. In light of recent volatility, we are restricting transactions for certain securities to position closing only,” the company wrote in a blog post.

Other platforms like Interactive Brokers have either confirmed similar moves or been rumored to have placed restrictions, though traffic and trading halts have also stymied traders.

Inquiries into freezes should not be limited solely to Robinhood.

This is a serious matter. Committee investigators should examine any retail services freezing stock purchases in the course of potential investigations – especially those allowing sales, but freezing purchases.

So @RobinhoodApp is saying they are protecting their users from over leveraging and getting burned. But somehow it’s okay when hedgefunds literally do the same exact thing. Nobody had a problem then until the hedge funds lost. Now speculating is a huge issue. #frauds