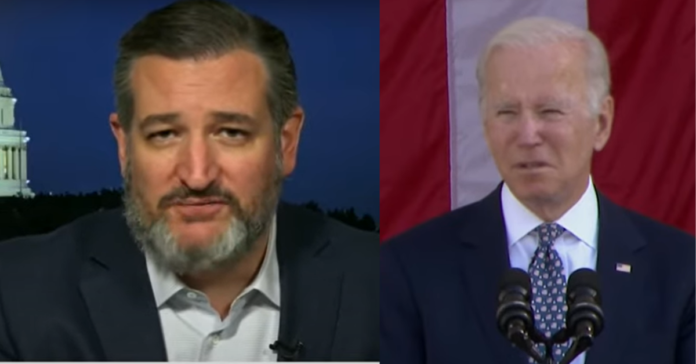 Sen. Ted Cruz (R-TX) dropped the hammer on the hapless Joe Biden administration, it is shocking no one has been fired yet, saying the incompetence at the U.S.-Mexico border was intentional not accidental.

Ted said: “You know, sadly, we didn’t get an answer to virtually anything, and one of the most dismaying things seeing Secretary Mayorkas’ pitiful performance at the hearing today is the disaster at the southern border is not an accident. It’s by design. They are intending this catastrophe to unfold.

“And the only explanation as to why is that they believe as a matter of crass partisan politics that if you let millions and millions of illegal aliens in that many of them in future years will vote Democrat, and so, they’re willing to overlook everything else.

“So I asked Secretary Mayorkas how many kids have been put in the Biden cages. He didn’t know. I asked him how many people coming here illegally have died, have been abandoned to die in the desert by the coyotes, he said I don’t know.

“I asked him how many women being trafficked in by human traffickers have been sexually assaulted, he said he didn’t know.

“I asked him how many of the children, of the over 100,000 children that are brought in by human traffickers, how many of them have been sexually assaulted. He said he didn’t know.

“I asked has even one Senate Democrat on the Senate Judiciary Committee come to see the Biden cages.

“For four years, they went on and on and on about kids in cages. Does even one of them give a damn enough to see the more kids in the bigger cages today? The answer, no.

“They don’t care. It is pure cynical politics, and I got to tell you, in Texas, we’re paying the price.

“When I’m down on the border, when I’m talking to farmers and ranchers and sheriffs and law enforcement, they are fed up. They are fed up with the crime, with the disease, with the poverty.

“It is overwhelming the state of Texas, and this administration is creating this lawlessness, and they’re doing it deliberately,” he said.