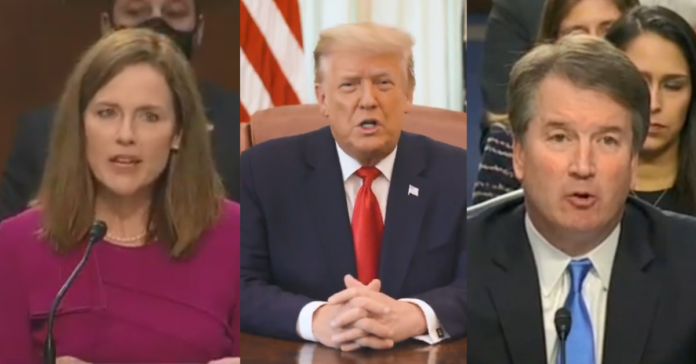 The Supreme Court tossed two lawsuits against former President Donald Trump today. The lawsuits were brought by a watchdog group and the AG’s of Maryland and the District of Columbia.

The lawsuits accused Trump of violating the Emoluments Clause of the Constitution and the Supreme Court just ruled the issue moot as Trump is no longer president.

Citizens for Responsibility and Ethics in Washington actually filed their lawsuit the day after Trump was inaugurated in 2017.  The attorneys generals of the District of Columbia and Maryland filed in June.

The lawsuits claimed that Trump was violating the Emoluments Clause prohibition against foreign bribes, which prohibits elected office-holders from receiving payments of any kind from foreign agents without the approval of Congress.

The plaintiffs argued that anytime a foreign dignitary or official stayed at or patronized a business owned by Trump, such as the Trump International Hotel in Washington, D.C., that constituted an unapproved payment.

All parties involved in both cases said the issue at the center of the lawsuits is now moot since Trump is out of office. The Supreme Court’s ruling also negated lower court rulings that the cases could move forward with discovery, according to Bloomberg.

The Emoluments Clause had never before been litigated until Trump took office, and the Supreme Court’s decision to toss the case leaves the legal question at the center of the lawsuits open.

CREW executive director Noah Bookbinder suggested in a statement that his organization’s lawsuit was more about optics and creating an appearance of “corruption” than holding the president accountable for an alleged crime.

“This important litigation made the American people aware for four years of the pervasive corruption that came from a president maintaining a global business and taking benefits and payments from foreign and domestic governments,” Bookbinder told Bloomberg in a statement.

Formally, the justices’ decision Monday declared the two suits moot — apparently due to Trump leaving office last week. The high court also wiped out rulings that federal appeals courts in New York and Virginia had issued saying the suits could proceed to discovery.

The Supreme Court did not offer a detailed explanation of its rationale. No justice recorded any dissent. The action was announced as part of a routine orders list the court issued Monday morning.

Last October, the justices turned down review of another suit focused on Trump’s alleged profits from his presidency. That suit, brought by Democratic Senators and House members, was turned aside by a federal appeals court on standing grounds.