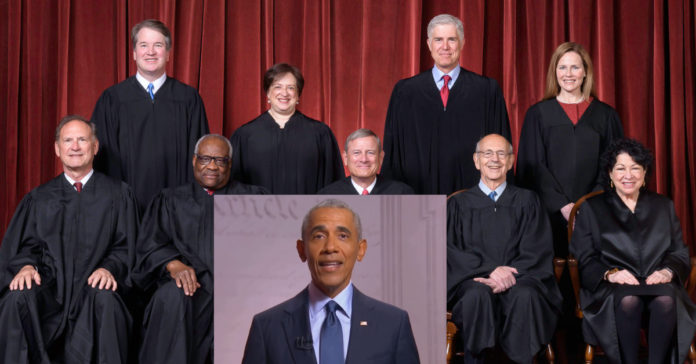 According to NBC: “The legal battle began during the Obama administration, when the EPA issued a plan for reducing carbon dioxide pollution from power plants by allowing their operators to get credit for generating more power from lower-emitting sources.

“A coalition of states and coal companies sued, saying the Clean Air Act gave the government authority only to restrict pollution from specific power plants, not to require power companies to shift to different methods of generation.

“After the Supreme Court blocked the enforcement of that rule, the EPA abandoned it and instead, under the Trump administration, proposed standards that would regulate only emissions from individual power plants.

“That relaxed restriction on greenhouse gases was then challenged by a different lineup of states and a coalition of environmental groups.”

According to SCOTUS Blog: “The Supreme Court sharply curtails the authority of the EPA to regulate greenhouse-gas emissions that cause climate change. In a 6-3 ruling, the court sides with conservative states and fossil-fuel companies in adopting a narrow reading of the Clean Air Act.”

BREAKING: SCOTUS rules that "Congress did not give the EPA the power to devise emissions caps based on the generation shifting approach the Agency took in the (Obama era) Clean Power Plan."

The court wrote: “Finally, the Government notes that other parts of the Clean Air Act, past and present, have “explicitly limited the permissible components of a particular ‘system’ of emission reduction in some regard. For instance, a separate section of the statute empowers EPA to require the “degree of reduction achievable through the retrofit application of the best system of continuous emission reduction.”

“The comparatively unadorned use of the phrase “best system of emission reduction” in Section 111, the Government urges, “suggest[s] a conscious congressional” choice not to limit the measures that may constitute the BSER to those applicable at or to an individual source.

“These arguments, however, concern an interpretive question that is not at issue.

“We have no occasion to decide whether the statutory phrase “system of emission reduction” refers exclusively to measures that improve the pollution performance of individual sources, such that all other actions are ineligible to qualify as the BSER.

“To be sure, it is pertinent to our analysis that EPA has acted consistent with such a limitation for the first four decades of the statute’s existence.

“But the only interpretive question before us, and the only one we answer, is more narrow: whether the “best system of emission reduction” identified by EPA in the Clean Power Plan was within the authority granted to the Agency in Section 111(d) of the Clean Air Act. For the reasons given, the answer is no.5

“Capping carbon dioxide emissions at a level that will force a nationwide transition away from the use of coal to generate electricity may be a sensible ‘solution to the crisis of the day.’

“But it is not plausible that Congress gave EPA the authority to adopt on its own such a regulatory scheme in Section 111(d).

“A decision of such magnitude and consequence rests with Congress itself, or an agency acting pursuant to a clear delegation from that representative body.

“The judgment of the Court of Appeals for the District of Columbia Circuit is reversed, and the cases are remanded for further proceedings consistent with this opinion.

“It is so ordered,” the ruling said.

The Supreme Court sharply curtails the authority of the EPA to regulate greenhouse-gas emissions that cause climate change. In a 6-3 ruling, the court sides with conservative states and fossil-fuel companies in adopting a narrow reading of the Clean Air Act.