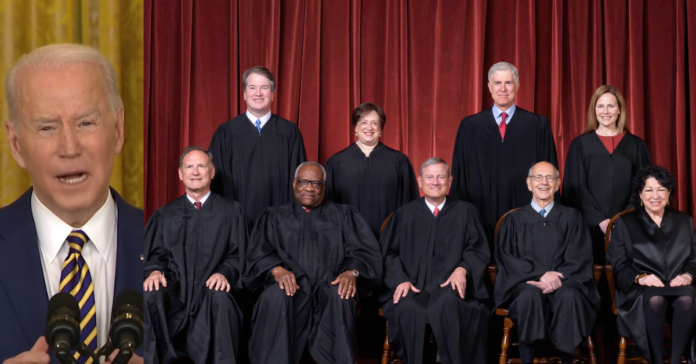 Supreme Court Justice Stephen Breyer will step down from the Court at the end of the current term or when Biden and the Dems can confirm his replacement according to multiple media reports.

Breyer is one of just three remaining liberal justices after former President Donald Trump and Kentucky Senator Mitch McConnell remade the court over the last few years. Breyer has been on the court for 27 years.

This will give Joe Biden to name a SCOTUS judge and possibly rid himself of the albatross that is Kamala Harris. Harris is rumored to be on the shortlist for a replacement on the court along with Kantaji Brown Jackson and Leondra Kruger.

Biden promised to name an African American woman to the bench if he had the chance. Breyer is 83. Dem Party activists have been trying to get Breyer to step down for months.

Appointed by President Bill Clinton, Breyer came to the Supreme Court in 1994 and became one of the court’s moderate-to-liberal members, though he often said it was misleading to label justices with such terms.

He believed that interpreting the Constitution should be based on practical considerations, changing with the times.

That put him at odds with conservative justices who said the court must be guided by the original intent of the founders.

“The reason that I do that is because law in general, I think, grows out of communities of people who have some problems they want to solve,” he said in an interview.

Breyer wrote the court’s opinion striking down a state law that banned some late-term abortions in 2000 and dissented seven years later, when the Supreme Court upheld a similar federal law passed by Congress.

He supported affirmative action and other civil rights measures. And in a widely noted dissent in 2015, he said the death penalty in America had become so arbitrary that it was probably unconstitutional.