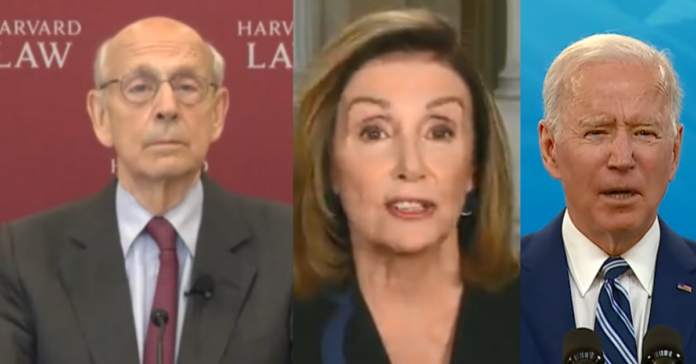 Justice Stephen Breyer, who many believe will retire soon so Biden, with a Dem-controlled Senate, can pick his replacement with minimal input from the GOP just fired a warning shot to the Dems who want to pack the court.

“These are more than straws in the wind,” the 82-year-old Breyer said. “They reinforce the thought, likely already present in the reader’s mind, that Supreme Court justices are primarily political officials or junior league politicians themselves rather than jurists.”

“The justices tend to believe that differences among judges mostly reflect not politics but jurisprudential differences. That is not what the public thinks.”

“The public now expects presidents to accept decisions of the court, including those that are politically controversial,” he said.

“The court has become able to impose a significant check — a legal check — upon the Executive’s actions in cases where the Executive strongly believes it is right.”

He added that people “whose initial instincts may favor important structural changes, such as court-packing should “think long and hard before embodying those changes in law.”

“The Senate confirmation process has changed over the past two or three decades, becoming more partisan with senators far more divided along party lines,” he said.

“Senators will often describe a nominee they oppose as too ‘liberal’ or too ‘conservative.’ What they say, reported by the press to their constituents, reinforces the view that politics, not legal merits, drives Supreme Court decisions.”

Tuesday’s Harvard lecture was part of an annual event in honor of the late Justice Antonin Scalia. Breyer advocates a judicial approach that expansively interprets the Constitution, the opposite of Scalia’s method, known as originalism, tied to the 18th Century understanding of constitutional guarantees.

Yet Breyer and Scalia, who died in 2016, were friends and in Tuesday’s lecture, Breyer joked about their appearances on the law school circuit.

In his nearly 27 years of service on the high court, Breyer has tried to bridge relations with conservatives, saying he abhors dissents and considers them a “failure.”

Some of Breyer’s most compelling opinions, it should be noted, have been written in dissent. In 2007, for example, he objected to an opinion by Chief Justice John Roberts rejecting school integration plans in Seattle and Louisville. Roberts said districts could not consider a student’s race when making school assignments to reduce racial isolation throughout the school district.

“This is a decision that the Court and the Nation will come to regret,” wrote Breyer, whose father, Irving Breyer, was a long-serving school board member in San Francisco. Breyer still wears the wristwatch his father received upon his retirement from the district. Breyer said the Roberts opinion threatened “the promise of” the 1954 Brown v. Board of Education decision.

Breyer said Tuesday that differences with his colleagues were based on their distinct views of the structure of the Constitution or how they interpreted statutes. He did not refer to instances in which his colleagues themselves have publicly questioned each other’s motives.

Breyer did allow that sometimes justices weigh public opinion or the future ramifications of a decision. And he acknowledged that the nine are products of their individual backgrounds and experiences.

Still, he said, “judicial philosophy is not a code word for ‘politics.'”

1. Justice Stephen Breyer’s new lecture on the politics of the Supreme Court, posted today, should not be misunderstood. https://t.co/2cUMXWGdVa