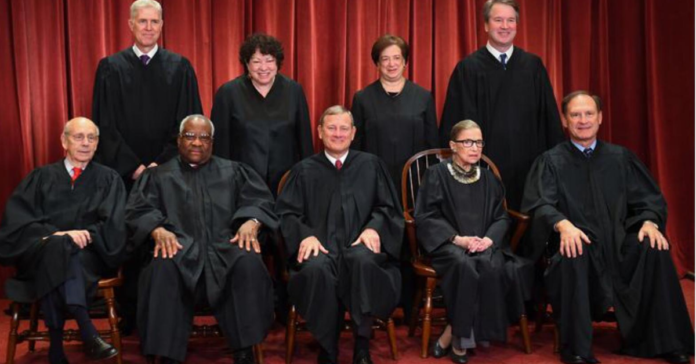 The Supreme Court just handed President Trump a huge win over some liberal groups who sued to stop the construction of the border wall.

The vote was 5-4 as the judges denied a request to halt construction by the ACLU and Sierra Club among others over environmental concerns.

“The Court’s decision to let construction continue nevertheless, I fear, may operate in effect, as a final judgment,” Justice Breyer wrote. “As the government previously explained, halting the construction process during litigation imposes significant costs on DoD, which can be required to reimburse its contractors for the additional expenses that such a delay causes them to incur,” the Trump admin lawyers argued.

From Fox News: A number of groups, including the ACLU and Sierra Club, had asked the high court to get involved again after the justices last year cleared the way for the administration to use military funds for construction while the case played out in the courts.

A federal appeals court had ruled against the administration last month, but the justices, for now, have given another temporary victory to the administration. “The fight continues,” said Dror Ladin, a staff attorney with the ACLU’s National Security Project.

“Every lower court to consider the question has ruled President Trump’s border wall illegal, and the Supreme Court’s temporary order does not decide the case.

We’ll be back before the Supreme Court soon to put a stop to Trump’s xenophobic border wall once and for all.”

In June, the Supreme Court also declined to hear an appeal from a coalition of environmental groups that pushed back against the Trump administration’s construction of the wall along the U.S.-Mexico border.

The groups, led by the Center for Biological Diversity, challenged a 1996 law giving the president authority to fight illegal immigration and border crossings, and limiting some legal challenges.

The coalition claimed that the Trump administration did not conduct sufficient environmental impact studies for the construction and that endangered species like the jaguar and Mexican wolf would be adversely affected by the barrier.

BREAKING: The Supreme Court has denied a request to halt construction of the border wall.