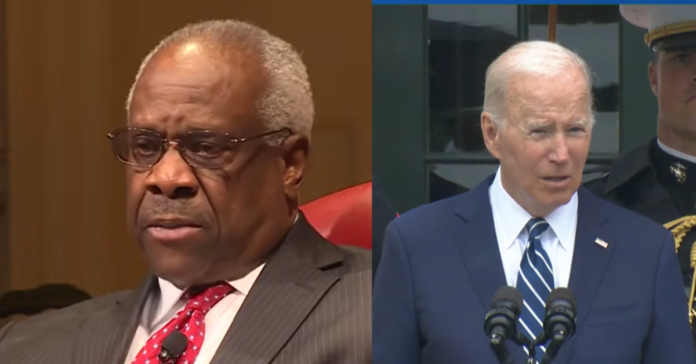 President Joe Biden was not happy with the Supreme Court’s landmark ruling in a gun rights case. He said: “I am deeply disappointed by the Supreme Court’s ruling in New York State Rifle & Pistol Association v. Bruen. Since 1911, the State of New York has required individuals who would like to carry a concealed weapon in public to show a need to do so for the purpose of self-defense and to acquire a license.

“More than a century later, the United States Supreme Court has chosen to strike down New York’s long-established authority to protect its citizens. This ruling contradicts both common sense and the Constitution, and should deeply trouble us all.

“In the wake of the horrific attacks in Buffalo and Uvalde, as well as the daily acts of gun violence that do not make national headlines, we must do more as a society — not less — to protect our fellow Americans.

“I urge states to continue to enact and enforce commonsense laws to make their citizens and communities safer from gun violence.

The Supreme Court STRIKES DOWN a New York gun-control law that required people to show "proper cause" to get a license to carry a concealed handgun outside the home. The vote is 6-3. https://t.co/jA2Gl7lTiG

“As the late Justice Scalia recognized, the Second Amendment is not absolute. For centuries, states have regulated who may purchase or possess weapons, the types of weapons they may use, and the places they may carry those weapons. And the courts have upheld these regulations.

“I call on Americans across the country to make their voices heard on gun safety. Lives are on the line,” he said.

“In what will likely prove one of the most important decisions in his illustrious career as a conservative jurist, Justice Clarence Thomas wrote a 6-3 majority opinion that brought greater clarity to this and future challenges under the Second Amendment.

“This case concerned concealed-carry restrictions under N.Y. Penal Law § 400.00(2)(f) that require a showing of “proper cause.”

“Lower courts upheld the New York law, but there were ample constitutional concerns over its vague standard, such as showing that you are “of good moral character.” New York wanted to exercise discretion in deciding who needs to carry guns in public while gun owners believe that the law flips the constitutional presumption in favor of such a right.

“Thomas rejected the two-part analysis used by lower courts and held that the presumption must be in favor of the individual right to possess a handgun in public like other rights in the Bill of Rights.

“The Court held “consistent with Heller and McDonald, that the Second and Fourteenth Amendments protect an individual’s right to carry a handgun for self-defense outside the home.”

“Accordingly, “because the State of New York issues public-carry licenses only when an applicant demonstrates a special need for self-defense, we conclude that the State’s licensing regime violates the Constitution.”

“New York Gov. Kathy Hochul immediately declared “Shocking, absolutely shocking that they have taken away our right to have reasonable restrictions.”

“The Claude Rain moment aside, it was shocking that Hochul would be shocked. Many of us were predicting a major loss for over a year and New York, as usual, litigated a bad case and made more bad law for gun control advocates.