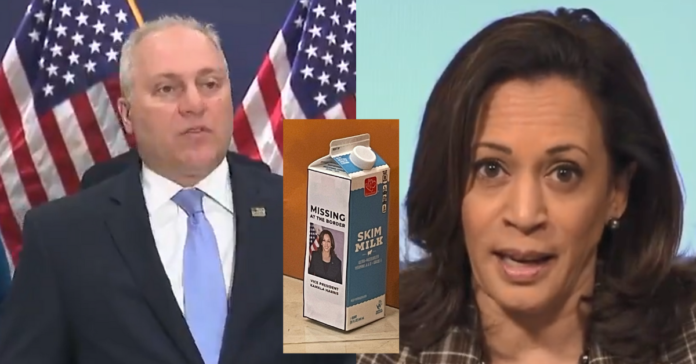 House Minority Whip Rep. Steve Scalise, R-La., called out Kamala Harris today over the ongoing crisis at the border and her lack of urgency to fix the problem despite Joe Biden giving her the job.

“If she’s the vice president of the United States and the president put her in charge of this, Vice President Harris needs to go down to the border and see this for herself,” Scalise said. “Because maybe she would then encourage President Biden to reverse his policies that have failed.”

“We’re going to continue to raise awareness to this crisis at America’s southern border. It was exclusively created by President Biden,” said Scalise.

“With the stroke of a pen he undid policies that were working to control our southern border. It had a ripple effect. It immediately resulted in people coming by the thousands every day,” he added.

The GOP trolled Harris at the presser with a milk cartoon with her picture on it with the phrase: ‘Missing at the border.”

Vice President Kamala Harris confirmed today she plans to visit Guatemala and Mexico in the coming days. She did not commit to visiting the southern border.

“The president has asked Secretary Mayorkas to address what is going on the border and he has been working very hard on that and is showing some progress because of his hard work,” she said.

“I have been asked to lead the issue of dealing with root causes in the Northern Triangle, similar to what the then-Vice President did many years ago.

“But I will tell you these are issues that aren’t going to be addressed overnight.

“We have plans in the works to go to Guatemala as soon as possible,” added the Vice President.

Rep. Steve Scalise: "We're going to continue to raise awareness to this crisis at America's southern border. It was exclusively created by President Biden." pic.twitter.com/kxoYswQToC