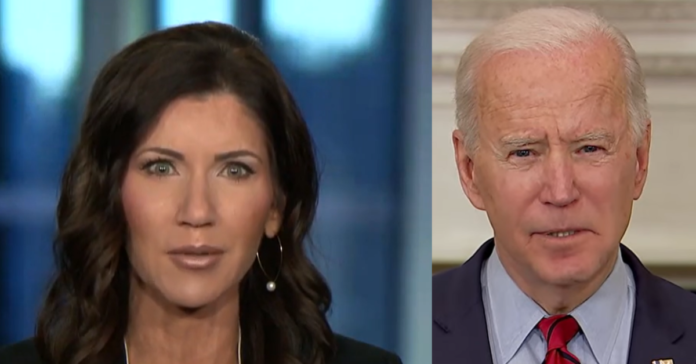 South Dakota Gov. Kristi Noem just made her move and announced she has sued the Biden administration. She said she filed her lawsuit today over Biden canceling the Independence Day fireworks celebration at Mount Rushmore. She is demanding the court “expeditiously” move to issue a permit so proper planning can take place for the event.

Noem filed the lawsuit Friday in U.S. District Court for the District of South Dakota Central Division. “Mount Rushmore is the very best place to celebrate America’s birthday and all that makes our country special,” Noem wrote. “After telling us they’d ‘circle back,’ the Biden Administration has not responded to our request to uphold the Memorandum Agreement between the State of South Dakota and the National Parks Service to host a safe and responsible national celebration and fireworks show.”

Noem ripped Biden saying his administration has “departed from longstanding precedent and reneged on this agreement” without any explanation. “We are asking the court to enjoin the Department of Interior’s DOI denial of the fireworks permit and order it to issue a permit for the event expeditiously,” she wrote.

This isn’t the first time Noem has moved to hold Biden to account.

From The Argus Leader:

Gov. Kristi Noem has signed her state onto the multi-state challenge to an executive order signed by President Joe Biden in January that established a “working group” to determine the social cost that carbon and greenhouse gases bring through environmental impacts, a monetary figure formally referred to as the Social Cost of Carbon (SCC).

The panel in late February issued a report setting the SCC at $52 a ton. Now, Noem and eight other Republican attorneys general, who are plaintiffs in the case filed Thursday in a U.S. District Court in Louisiana, say the executive order is an “unconstitutional overreach” that will slow the economy and “impose more burdens and harms to the American people.”

“After a year of misguided lockdowns in response to the COVID pandemic, the last thing that America needs is more burdensome regulation that will cripple our economy,” Noem said in a news release.

“President Biden’s attempt to implement a ‘social cost of greenhouse gases’ value will result in government sticking their hands into virtually every aspect of our day-to-day lives.”

The SCC will be used in federal regulators’ cost-benefit analyses when considering proposed policy and projects.

Rykia Dorsey Craig, a spokesman for the White House handling the South Dakota region, deferred questions to the U.S. Department of Justice, which did not respond to request for comment.

The Republican governor told a crowd Thursday that she's directed her office to file a lawsuit against the National Parks Service after the agency earlier this year rejected permits to hold the fireworks display at Mt. Rushmore on Independence Day. https://t.co/EJDUNPNKzA

Biden’s entire vision for America is just more government. Government creates all the jobs. Government spends all the money. Government makes the decisions. Nothing about empowering the independence and ingenuity of the American people. What happened to the American Dream?