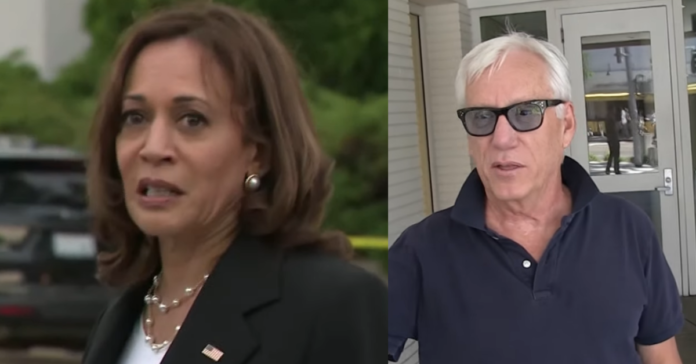 Kamala Harris got some serious blowback after another awful public performance by the VP this time to a grieving community. Biden and his team have tried to put Kamala out there more because Biden is the worst communicator this nation has ever seen ascend to the highest office in the land.

He is old and she is young and his aides must have hoped she could do the job, at the elats the easiest part of the job, talk to citizens and the media.

But in what has come as a total shock to the nation, Kamala is actually worse than Biden when in front of a microphone. No one thought that could be possible, least of all the Dems, who now have two toxic duds on their hands as they desperately search for someone else to run in 2024.

Kamala said: “We got to take this stuff seriously, as seriously as you are because you have been forced to have take this seriously.

“The whole nation should understand and have a level of empathy to understand that this could happen anywhere to any people in any community,” she continued. “And we should stand together and speak out about why it’s got to stop.”

Enter the internet. The Daily Wire compiled the best comments about Kamala’s speech:

Kamala Harris: “We got to take this stuff seriously, as seriously as you are because you have been forced to have take this seriously” pic.twitter.com/pp6Y2nP3Cm

Nan Hayworth, M.D., former congresswoman: “Ms. Harris isn’t a voice for the voiceless, but she does speak for those who have absolutely nothing to say.”

John Cardillo, political commentator: “She has to have brain damage, right?”

Greg Price, political commentator: “Our first female VP! Chosen specifically because of her race/gender and literally sucks at this.”

Edward Ongweso Jr., reporter: “Don’t they have Obama’s speech writers on retainer or something, what’s up?”

Josh Olson, writer: “Ok, I give up. There ARE some jobs where you shouldn’t be allowed to drink on the clock.”

Adam Rosen, writer: “Aside from how insane this quote is, no politicians seem to take this seriously, they never do, or else it wouldn’t keep happening, just my thoughts.”

Whitney McIntosh, editor: “Every new quote of hers makes less and less sense as a complete sentence.”

Arash Karami, writer: “My expectations for this administration was literally on the floor and they’re not even willing to meet me there.”

Shay Stewart Bouley, writer: “I’m sorry, but no. Just no.”