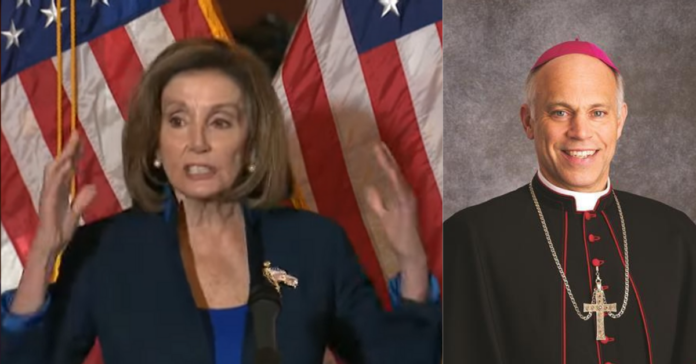 The archbishop of San Francisco, Rev. Salvatore J. Cordileone, is calling for Holy Communion to be withheld from Catholics who support abortion rights especially if they are public figures like Speaker Nancy Pelosi (D-Calif.), who is one of his parishioners.

He wrote, “Those who reject the teaching of the Church on the sanctity of human life and those who do not seek to live in accordance with that teaching should not receive the Eucharist. Abortion is the axe laid to the roots of the tree of human rights: when our culture encourages the violation of life at its youngest and most vulnerable condition, other ethical norms cannot stand for long.

“The Church’s teaching and discipline on worthiness to receive Holy Communion has been consistent throughout her history, going back to the very beginning.” Cordileone then wrote the words that will come back to haunt Nancy Pelosi saying that receiving Holy Communion and determining one’s worthiness to receive the sacrament is usually a “private matter,” but he gave one exception. Public figures like Pelosi although he did not name her.

“There are, however, circumstances in which such is not the case, occasions when those in public life violate the boundaries of justifiable cooperation,” he wrote.

“In the case of public figures who profess to be Catholic and promote abortion, we are not dealing with a sin committed in human weakness or a moral lapse: this is a matter of persistent, obdurate, and public rejection of Catholic teaching.”

“In examining one’s conscience about being properly disposed to receive the Holy Eucharist, the definitions regarding the kind and degree of cooperation in an evil act serve as a necessary guiding principle. Most of the time this is a private matter.

“There are, however, circumstances in which such is not the case, occasions when those in public life violate the boundaries of justifiable cooperation. In the case of public figures who profess to be Catholic and promote abortion, we are not dealing with a sin committed in human weakness or a moral lapse: this is a matter of persistent, obdurate, and public rejection of Catholic teaching. This adds an even greater responsibility to the role of the Church’s pastors in caring for the salvation of souls.

“As followers of Christ, we must all heed the plea of St. Paul: “Do not conform yourselves to this age but be transformed by the renewal of your mind, that you may discern what is the will of God, what is good and pleasing and perfect” (Rom 12:2).

“This effort requires great courage in our culture, and you are a source of inspiration and pride to your fellow Catholics. With regard to Catholics in public life who participate in abortion or seek to advance it through legislation or advocacy, precisely because these are actions of which many people are aware it introduces another consideration: scandal.

“The Catechism of the Catholic Church defines scandal as “an attitude or behavior which leads another to do evil” (CCC n. 2284).

“Prominent figures in society help to shape the mores of that society, and in our culture their advocacy of abortion definitely leads others to do evil. This must be stated with clarity: anyone who actively works to promote abortion shares some of the guilt for the abortions performed because of their actions.

“But there is another source of scandal that pertains specifically to Catholics in public life: if their participation in the evil of abortion is not addressed forthrightly by their pastors, this can lead Catholics (and others) to assume that the moral teaching of the Catholic Church on the inviolate sanctity of human life is not seriously held.

“When public figures identify themselves as Catholics and yet actively oppose one of the most fundamental doctrines of the Church— the inherent dignity of each and every human being and therefore the absolute prohibition of taking innocent human life—we pastors have a responsibility both to them and to the rest of our people.

“Our responsibility to them is to call them to conversion and to warn them that if they do not amend their lives they must answer before the tribunal of God for the innocent blood that has been shed.

“Our responsibility to the rest of the Catholic community is to assure them that the Church of Jesus Christ does take most seriously her mission to care for “the least of these,” as Our Lord has commanded us, and to correct Catholics who erroneously, and sometimes stubbornly, promote abortion.”