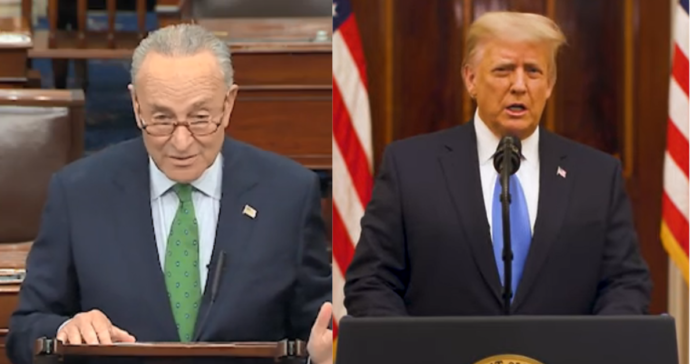 Nancy Pelosi and the Democrats in the House will send the articles of impeachment against Trump to the Senate Monday. The big drama is will the Senate convict.

From all accounts, the focus is to prevent Trump from running again. The Dems need 17 GOP votes to convict and a majority after that to ban Trump from holding public office again. Many in the GOP were rumored to be on board with this but it looks like time is Trump’s friend.

Now we have multiple GOP Senators saying Trump will not be convicted so it is no surprise the Dems are now floating using the 14th Amendment to ban Trump from holding office again.

“The chances of getting a conviction are virtually nil,” said Sen. Roger Wicker.

“I don’t know what the vote will be but I think the chance of two-thirds is nil,” said Sen. John Cornyn said.

“From listening to the dynamic — and everything to this point — it’s going to be tough to get even a handful,” said Sen. Mike Braun.

“I think so many are getting confused by the fact that we’re doing this – and everybody has views that it’s kind of a constitutional concern.”

Democrats are mulling whether they can use the 14th Amendment to prevent former President Trump from ever holding office again.

The discussions are in the early stages — and top members of the Senate caucus aren’t yet convinced it’s a viable remedy — but senators are exploring their options as they plot a strategy after Trump’s supporters stormed the Capitol.

“It’s an idea that’s out there that I think people are contemplating in the accountability space,” said Sen. Tim Kaine (D-Va.), who described himself as “quite confident” that Congress could act under the constitutional amendment.

“I just want us to choose a path that maximizes focus on the Biden-Harris agenda,” Kaine added.

Sen. Richard Blumenthal (D-Conn.), who caveated that talk of the 14th Amendment was hypothetical, said it could be applied to Trump, with one mechanism being a resolution from Congress.

“The remedies of the 14th Amendment certainly may be appropriate for someone who incites an insurrection as Donald Trump did,” said Blumenthal, a member of the Senate Judiciary Committee.

Sen. Chris Murphy (D-Conn.), cautioned that it was early, but called using the 14th Amendment “certainly a possibility.”