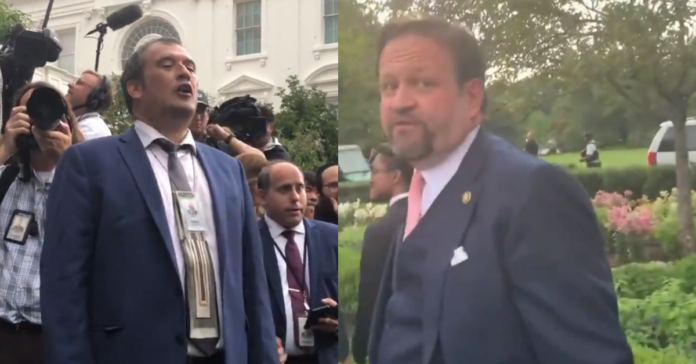 Gorka was at Trump’s social media summit and when Trump invited the attendees to sit for his press conference announcing his new executive order, the media was not happy.

The media complained about the seating and sparks flew as Trump concluded his remarks. Gorka was not having CNN and Playboy reporter Brian Karem’s nonsense and called him out.

From The Washington Examiner: Several videos caught former White House staffer Sebastian Gorka shouting and getting into the face of a journalist who taunted him Thursday inside the Rose Garden.

The confrontation took place after President Trump hosted a press conference announcing an executive order to tally non-citizens through the Commerce Department.

In a video leading up to the confrontation, Karem said the audience was a “group of people that are eager for demonic possession.” When Gorka shouted back at Karem, he said, “We can go outside and have a long conversation.”

“You’re a punk! You’re not a journalist! You’re a punk!” Gorka shouted at Brian Karem, a CNN political analyst and reporter for Playboy.

Guests who were invited to the social media summit cheered on Gorka; another person can be heard saying he should not be “attacking journalists like this.”

A Secret Service agent then tried to keep the two groups separate.

My $$$ was on Seb as I note pic.twitter.com/yXfJfOKaZT

Wanted to get the part where a guest at a White House function begins walking toward the press and James O’Keefe is filming and Joy Villa is showing off her FREEDOM gown. pic.twitter.com/ZPIXRRVo6K

After the @POTUS statement, I queried @SebGorka (former deputy assistant to @POTUS) in the @WhiteHouse Rose Garden about why he blocks so many journalists (including me) on Twitter, despite insisting that people on social media shouldn't be blocked. Here's what happened. pic.twitter.com/ujpztNDncb