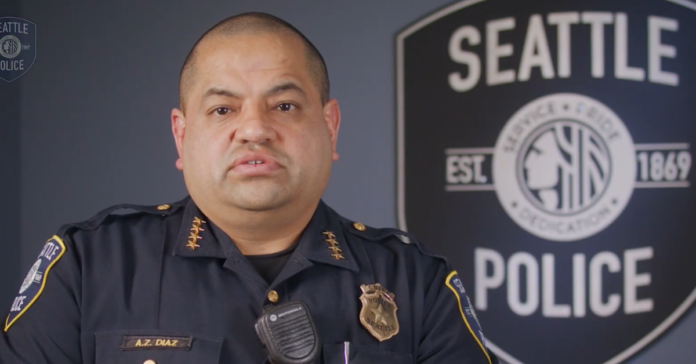 The chickens are coming home to roost for Seattle’s embattled politicians who are now facing a staffing crisis in the Seattle police department after more than 200 officers quit their jobs in the last year.

The Seattle Police Department confirmed the bad news and revealed that 66 officers left their jobs so far in 2021. Not surprisingly, many of the officers said the anti-police climate in the city, especially in the City Council, as one of the top reasons for leaving.

Police Chief Adrian Diaz called the situation a “staffing crisis” and one suspects we will see this repeated in many cities across America. Diaz broke down the numbers confirming that 180 police officers quit last year and 66 officers have quit so far this year. “We are at record lows in the city right now. I have about 1,080 deployable officers. This is the lowest I’ve seen our department,” Diaz said.

“Despite an increased focus on recruitment and retention, the Seattle Police Department continues to lose sworn officers at a record pace due to ongoing budget uncertainty,” a spokesperson for Mayor Jenny Durkan said Tuesday.

“Based on exit interviews, we know the Council’s threats of continued layoffs or cuts are having a direct impact on decisions to leave the department. Mayor Durkan continues to caution City Council against making additional one-time cuts without addressing hiring and retention of officers, especially diverse officers, to respond to the highest priority calls,” the statement said.

“I’m hoping that it starts to level off,” Diaz said. “I do see that this year we could have a significant amount of people leaving.”

Seattle’s former police chief, Carmen Best, who resigned last summer, said the budget cuts and anti-police rhetoric left her feeling as though her department was “destined to fail,” according to an interview she did with NPR.

And the Seattle Times Editorial Board laid the blame for the city’s rising homicide rate — a full 50% higher in 2020 than in 2019 — squarely at the feet of the city’s progressive legislators.

“The Seattle City Council’s reckless rhetoric and slapdash moves to defund the police have hurt — not helped — the safety of residents citywide.

The list is long: Funding cuts without the former chief’s insight and a climate that spurred an exodus of officers have hurt the department’s ability to respond to trouble,” the Seattle Timed ed board wrote.

“Detectives and other specialists are pulling routine patrol shifts to respond to 911 calls rather than working to prevent or investigate crimes because the department is so short-handed.

After calling 911, residents throughout the city have had to wait for police response that, in some instances, never happens.”

According to the compliant, what Mayor Jenny Durkan called “a summer of love” proved instead a month of mayhem resulting in deaths, robberies and sexual assaults. Now city leaders may rely on the type of immunity defense they opposed for police officers. https://t.co/dItXuFEgZo

Police in Seattle declared an Antifa May Day protest to be a riot after marchers reportedly assaulted cops and a small child. https://t.co/o98NK4JWvu