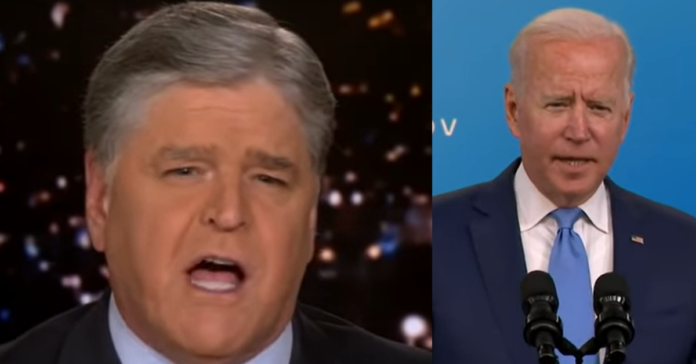 Sean Hannity dropped the hammer on the Biden administration Tuesday night over the debacle in Kabul saying President Biden has “humiliated America” on the world stage.

Sean said: “Day 31, Americans abandoned and held behind enemy lines, held hostage by the Taliban. The administration is as clueless as ever. They don’t know how many Americans are being held in Afghanistan.

“Secretary of State Antony Blinken could not seem to answer a single question. Anyone who is a US citizen, we know they are getting hunted by the Taliban and their death squads. We know this because it’s on video.

Sean then played the video which showed:

“Secretary of State Antony Blinken refused to comment this week on why the Biden administration won’t destroy high-profile US equipment in Afghanistan, telling lawmakers to ask the Department of Defense.

“Heavy equipment, the tanks, the helicopters, all this is GPS tracked. We can identify this. Why did we not destroy it, or don’t destroy it now?” asked one lawmaker.

“I know my colleagues from the Defense Department will have an opportunity to speak to Congress, they’re the experts on this,” said Blinken.

“We know the location of this equipment, are we going to destroy it or not?” pressed the legislator.

“Much of this equipment is either inoperable or will soon be inoperable because they can’t be maintained,” claimed Blinken.

President Biden on Wednesday said he has “great confidence” in Gen. Mark Milley to carry on as chairman of the joint chiefs of staff after a forthcoming book reported extraordinary measures Milley took at the end of the Trump administration to guard against a potential missile launch.

Biden reaffirmed his faith in the nation’s top ranking military officer during a meeting with business leaders on vaccine mandates Wednesday. His remarks come amid calls from some corners of Congress for Milley’s resignation.

“The president knows Gen. Milley. He has been chairman of the joint chiefs for almost eight months of his presidency,” White House press secretary Jen Psaki said at a Wednesday briefing. “They’ve worked side by side through a range of international events, and the president has complete confidence in his leadership, his patriotism and his fidelity to our Constitution.”

Psaki offered cover for Milley’s reported actions, citing Trump’s erratic behavior at the end of his first term in office.

“The outgoing president of the Untied States during this period of time fomented unrest leading to an insurrection and an attack on our nation’s capital on Jan. 6 … one of the darkest days in our nation’s history,” Psaki said.