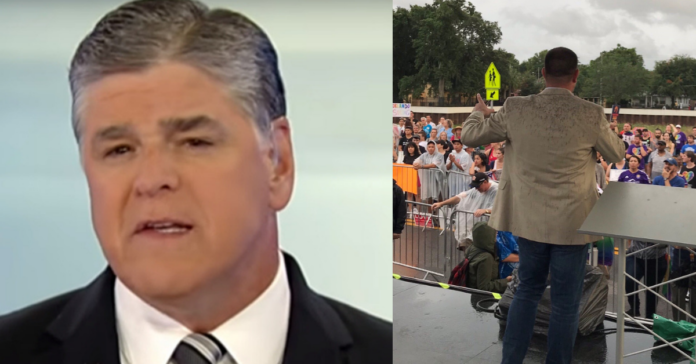 The media runs their polls that show Trump is in trouble and not surprisingly they look a lot like the polls from 2016 before Trump won. They have learned nothing.

The Democrats aren’t even demanding Hope Hicks testify in public today – that is how bad they play this game.

Trump easily got 20,000 people to join him in demanding four more years to finish his agenda last night. As Sean Hannity points out, the Democrats had a feeble response. Look, Trump will have to fight to win, but the Democrats are really not playing the same game as Trump and as long as they continue, Trump will triumph.

“We know that love wins because love has already won by you being here today” #WinWithLoveRally #DefeatTrumpFL #flapol,” posted the official Twitter account of the Florida Democratic Party.

President Trump confirmed this week that more than 100,000 people requested passes to hear his high-stakes speech in Orlando Tuesday night; with massive lines forming hours before the Commander-in-Chief is set to kick-off his 2020 re-election campaign.

“It was a sea of red under the sweltering sun Tuesday as thousands of Trump supporters, decked out in MAGA-inspired attire, waited outside the Amway Center hours before the president’s arrival,” reports Fox News.

“He kept his promises, he is passionate about America. He wants to keep us safe, I am tired of people hating on him. He is doing his best to defend us,” Alan Machapento, a New Jersey native, told Fox News. “I am watching the Dow, we have the lowest unemployment ever.”

“From the moment he said he was running, I was a Trump fan,” said another supporter. “He is not a politician, and I am so glad my grandson is going to grow up in an America that is great.”

“There are a lot of mothers and women sitting in jail and they are (working on reforms),” said another woman on the President’s efforts to promote criminal justice reform. “We need to believe in America and we are on the right track. It is Congress that is not.”

“The Fake News doesn’t report it, but Republican enthusiasm is at an all time high. Look what is going on in Orlando, Florida, right now! People have never seen anything like it (unless you play a guitar). Going to be wild – See you later!” tweeted Trump.

“Thousands of people are already lined up in Orlando, some two days before tomorrow nights big Rally. Large Screens and food trucks will be there for those that can’t get into the 25,000 capacity arena. It will be a very exciting evening! Make America Great Again!” added the President.

“There’s going to be a bunch of people, and it’s going to be pretty intense,” said one supporter. “The electricity is going to be high. It’s time for America to get back on its feet and be made better than it’s ever been before.”

“We know that love wins because love has already won by you being here today” #WinWithLoveRally #DefeatTrumpFL #flapol pic.twitter.com/IuzivDDkeK