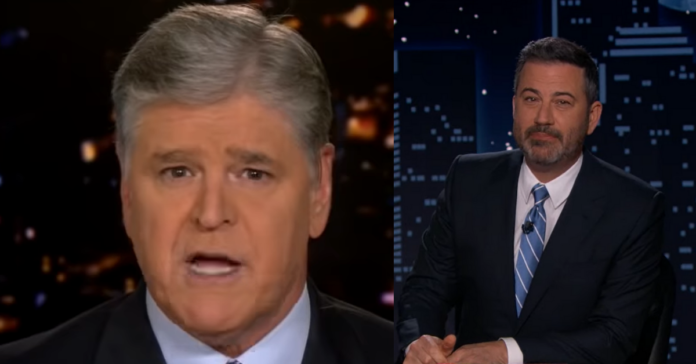 Sean Hannity has had enough of Jimmy Kimmel. He issued a warning to the Hollywood star not to talk about him or his show anymore or Sean would “hit back 50 times harder.” (See Video Below)

“Jimmy, what is with all the anger and all the cheap shots?” Hannity said on his highly-rated prime time show. “In case you haven’t noticed, homeless people are all over your state. Don’t you have anything better to do? Maybe actually trying to be funny or boost your dismal ratings because we’re absolutely crushing you by like 70% in total viewers.”

“Jimmy, here’s my advice, don’t talk about my show anymore,” Hannity warned before playing old controversial clips by Kimmel that Jimmy later had to apologize for. “Let’s remind people, take a trip down memory lane,” Hannity said. “You wanna talk about ignorant a**holes? This is you dressed as Karl Malone.”

“And check this out. This is you, an ignorant a**hole, when you had a cucumber in your pants during The Man Show. Maybe your bosses at Disney can talk you out of your bad behavior,” Sean said.

“You talk about my show, I’ll hit you back 50 times harder,” Hannity threatened.

“We had a little spat back in the day. And if he wants me to remind his bosses at Disney of all the crap that he’s done over the years that, frankly, are pretty ignorant, to use his words, I’ll be glad to pick that fight.”

“I’d advise him not to talk about me anymore. That’s my advice,” Hannity said before adding, “late night as we once knew it is dead.”

Kimmel had called out Jenner for her remarks on homeless people.

‘This is how well Caitlyn Jenner understands the plight of everyday Californians here in LA,’ he said, in reference to her comments about her friend at the airplane hanger.

‘Ah, homeless people: can’t walk around them, can’t fly over them,’ he added.

Jenner announced her candidacy about two weeks ago in a written statement on Twitter.

Prior to the interview, she has posted on Twitter and released a video and other materials on her website that provided only a rough sketch of how she would manage the nation’s most populous state.

During her wide-ranging chat with Hannity, Jenner said she would reopen the state immediately after more than a year of pandemic restrictions, opposed efforts to defund police departments and suggested that funds from the state’s troubled high-speed rail project should be channeled into desalination plants to provide more water in the drought-prone state.

While discussing her place as a transgender role model, Jenner lamented the high suicide rate within the community and added, ‘For me to be a role model for them, to be out there. I am running for governor of the state of California, who would ever thunk that? We’ve never even had a woman governor.’

More than a week ago, Jenner witnessed an outcry from many in the transgender community after she told TMZ that she opposes transgender girls competing in girls’ sports at school, calling it ‘a question of fairness’.

She hinted she would have more to say on the issue.

‘I just said biological boys in sports. There’s more to it than that, and I think in the future I will explain more of that,’ she added.

'You Want to Talk About Ignorant A**holes?' Hannity Fires Back at Kimmel for Mocking Caitlyn Jenner Interview https://t.co/FwodKh54HO via @mediaite

Jimmy Kimmel called Caitlyn Jenner an “ignorant a-hole” when she made comments about the homeless in California during an interview with 'Fox New’s Sean Hannity. #THRNews pic.twitter.com/s8R87Pt7q5