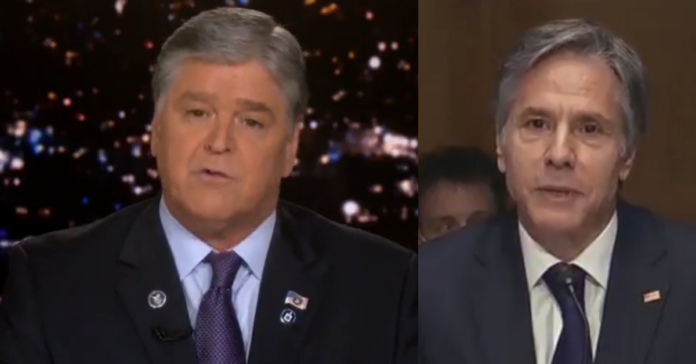 Sean said: “Where is Mike Pompeo where we need him? Blinken is so totally and completely and utterly clueless it makes Neville Chamberlain look like Patton in comparison.”

“Tony Blinken is that dumb and a complete fool. He has no clue about the real world. No clue or understanding at all about the enemy that is the Taliban. They are our enemy. They are terrorists.

“How dumb are you? How is it possible for one person to be that stupid?

“You’re not watching the videos, Tony? Not seeing any of the beatings we are showing almost nightly?

“Blinken was lying as the world watched the Taliban on the move, they did nothing.

“When they had full safety and security in Kabul, they could’ve extracted every American and every Afghan ally and even the billions of dollars of military equipment.

“Donald Trump’s plan, the one that he had in place, we would had to keep Bagram airbase in perpetuity.

“He should be fired or impeached,” Sean said.

“But the president refused to listen to his own generals and the intelligence community. You warned him precisely what would happen when we withdrew,” McCaul told Blinken in his opening remarks.

“This was an unmitigated disaster of epic proportions. I never thought in my lifetime that I would see an unconditional surrender to the Taliban.”

As mobs of Afghans gathered around the perimeter of the airport, clogging the gates, an ISIS-K suicide bomber exploded, killing 13 American service members and scores of Afghans.

Rep. Ann Wagner (R-Mo.) said ​she was questioning Blinken on behalf of the families of the fallen, including Marine Lance Cpl. Jared Schmitz, one of the 13 who were killed Aug. 26.

“Make no mistake, Mr. Secretary, the Biden administration’s egregiously inept withdrawal has left America and the world a much less safe place 20 years after Sept. 11,” Wagner said​, and then asked if he took “any responsibility … for this disastrous withdrawal, or do you still want to call it a success?”

BLINKEN: "Nothing we saw indicated a collapse in 11 days."

Ask him about this @WSJ report:

➡️ "On Aug. 3…a new…assessment concluded Kabul could fall… within weeks…"