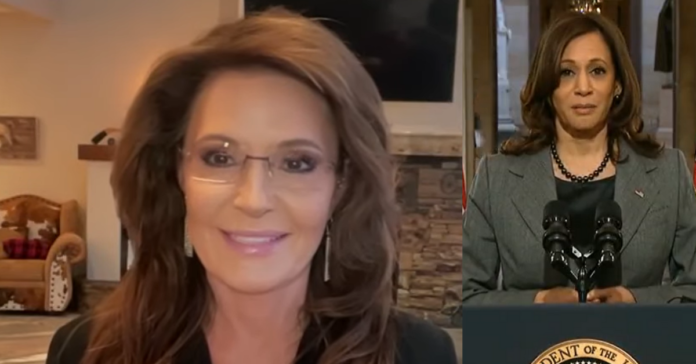 “I’m sure you agree with me being the outsider. Donald Trump actually was probably harder. He had a much harder time with the press than Kamala or AOC or certainly Barack Obama.”

Palin said, “Oh, absolutely President Trump did have it much harder. It was always three against one with Trump. It was the Democrats. It was the press, obviously, and it was the RINOs within the establishment of the party and, yet, look what Trump could accomplish.

“Same answer with Kamala and her most recent issues, blaming gender as I had with AOC.

“Man, these fake feminists who bring the woman’s movement back so far by channeling everything right on back to oh, it’s our gender, doggone it, people don’t like us because we are female.

“Holy moly, Rachel, I know you, having been raised with just hard-working, that work ethic, that grounded-ness that I think is so necessary to be a good person and a good public servant.

“Rachel, perhaps, again, their foundation isn’t what is commonplace in the American populist where, no, gender really doesn’t matter.

“It’s the character of who you are. It’s your work ethic.

“I’m really thankful that I was brought up in a place where gender truly has not mattered, and certainly don’t blame criticisms on me being female.

“Shoot, can you imagine if I would have done that all these years?

“Now, what would they be saying?”