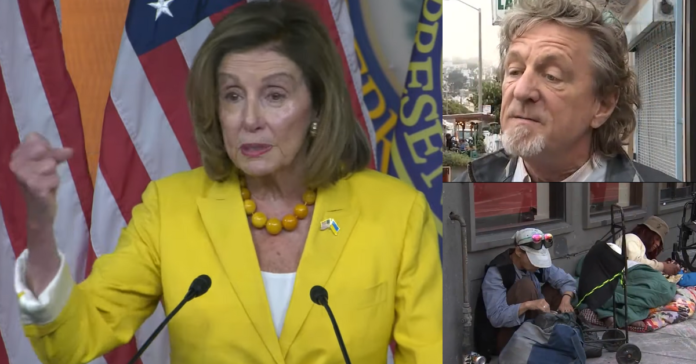 Speaker Nancy Pelosi’s hometown is under siege from failed Dem policies that have negatively impacted the residents, the tourists, and the business owners.

The only ones winning are the politicians because they rarely get voted out. But that changed when the fed-up residents recalled the terrible DA Chesa Boudin and installed someone who promised to finally crack down and get tough on crime.

But it has been too little too late and now businesses in heavily trafficked areas are revolting and refusing to pay taxes until the politicians clean up the city. (See video below)

The Castro Merchants Association sent a letter to San Francisco city officials telling them they plan to stop paying taxes if San Francisco doesn’t do more to address burglaries, vandalism, people with behavioral health problems, and the homeless camping wherever they want.

Terrance Alan, co-president of the association and a business owner, said:

“Every day we wake up and have to help people on the street.

“We have to clean up feces on the street.

“We have to clear our people from doorways, so we can open our businesses.

“At this point, it’s a failure of the system to help them.”

“Sometimes they do get violent.

“The city does need to take care of these people, find a place for them to stay and help businesses.

“When we call, they come 30-40 minutes later. You know, the police department.”

The city’s Department of Homelessness and Supportive Housing said:

“The Department of Homelessness and Supportive Housing will be opening 1,000 shelter beds over the next three months that will give people in the Castro and other neighborhoods a place to stay inside.

“Clinical teams are trained in assessing individuals for involuntary holds.

“However, California state law sets a very high threshold for these holds, and often that threshold is not met, even when it looks to the public like an individual needs help.”