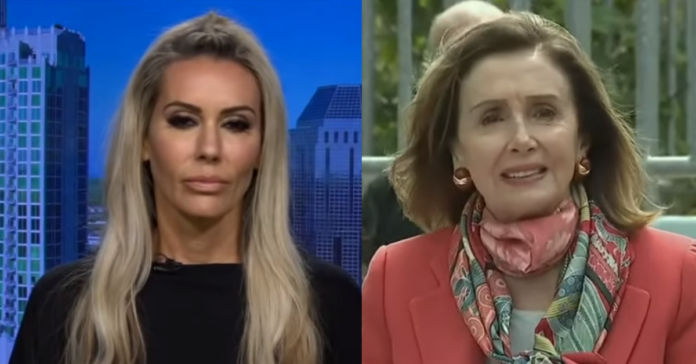 Nancy Pelosi is on the ropes and look, anything is possible in 2020 and she could lose after her salon stunt backfired and made national headlines. People do not like two sets of rules, it is usually fatal to a politician if that reputation clings to them.

It is not just her electoral future but that of Biden and the Senate and House that is driving her and her family to try to clean up this huge mess.

Christine Pelosi smugly released a letter for Nancy Pelosi’s stylist that tried to turn the tables on the owner and failed. ( See Video Below)

Because the owner went of Tucker Carlson’s show and set the record straight.

“There was no way I could’ve set that up,” ESalonSF owner Erica Kious said. “I’ve had a camera system in there for five years. I mean, I didn’t go in there and turn cameras on as soon as she walked in and set her up. So that is absolutely false.”

“This isn’t even political,” she stressed. “She’s been coming in there it’s the fact that she actually came in, didn’t have a mask on, and I just thought about my staff and people not being able to work and make money and provide for their families, and if she is in there comfortably without a mask and feeling safe, then why are we shut down? Why am I not able to have clients come in?”

The letter Christine Pelosi released is below.

“In response to press inquiries on the matter, Mr. De Nardo can confirm that he indeed did provide professional stylist services to House Speaker Nancy Pelosi (CA) on August 31, 2020, at the “eSalon,” located … in San Francisco, California. Mr. De Nardo, at all times, took all requisite safety measures throughout his appointment with Speaker Pelosi, including sanitation of all service areas and wearing of CDC-recommended protective equipment, and thereafter ensured the premises were similarly sanitized following Speaker Pelosi’s departure.

Mr. DeNardo has worked at eSalon for approximately six (6) years and regularly communicates with the salon owner, Erica Kious. In fact, Mr. DeNardo received advance approval from Ms. Kious the day prior to the appointment during a telephone discussion on August 29, 2020 at 9:26 pm, wherein Mr. DeNardo advised Ms. Kious that he would not proceed with Speaker Pelosi’s appointment without Mr. Kious’ authorization. Ms. Kious took special interest in the appointment during this telephone call, wherein she made several vitriolic and incendiary comments about Speaker Pelosi and her purported responsibility for temporarily suspending operations of Ms. Kious’ business, despite such orders actually being put into place not by Speaker Pelosi, but by Governor Gavin Newsome and San Francisco Mayor London Breed. Ultimately, Ms. Kious authorized Mr. DeNardo to proceed with Speaker Pelosi’s appointment.

This office is in possession of photographs, videos and witness information that Ms. Kious, contrary to her prior statements to the press, has actually been operating her business during the stay-at-home orders and similar executive orders limiting in-store operations since as far back as April 2020. Ms. Kious is seen on photographs and video footage styling various clients’ hair, ignoring social distancing guidelines, and not wearing protective equipment (masks), as recently as a few days prior to Speaker Pelosi’s arrival at eSalon on August 31, 2020. What’s more, Ms. Kious has also been actively encouraging and almost forcing stylists who operate at eSalon to violate such orders for her own financial benefit in the form of receiving lease payments.

The fact that Ms. Kious is now objecting to Speaker Pelosi’s presence at eSalon, and from a simple surface-level review of Ms. Kious’ political leanings, it appears Ms. Kious is furthering a set-up of Speaker Pelosi for her own vain aspirations. Mr. DeNardo’s name has now been dragged through the mud for simply following Ms. Kious’ recommendations; he wishes to move forward with his efforts to earn an income and asks that his privacy be respected during this time.”