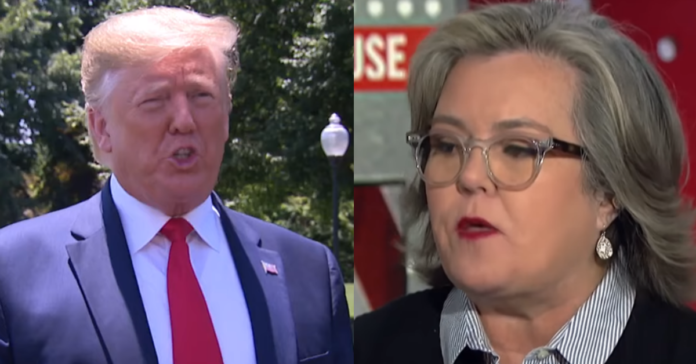 Rosie O’Donnell went on SiriusXM’s The Michelangelo Signorile Show today and quickly took the conversation into the gutter. What is wrong with her?

She is really a nasty woman. Just nasty and rude. Signorile asked her if Trump was positioning Ivanka to run for office (after Ivanka had a few high profiles appearances on the world stage of late) and Rosie went straight to the gutter.

“I don’t know what he’s doing with her,” she said. “I think he’s been doing bad things with her for a very long time. There’s a creepy incest feel that is a very prevalent amongst Donald Trump and his children, at least as daughter.”

“Very creepy. I don’t know. I think she’s like, you know, a talentless, non-intelligent, non-powerful woman.”

“And, I think she’s — it’s laughable to think of her in any kind of public service role. No one in his family has ever been in public service. Why should they start now?”

What an absolute disgrace, but it is par for the course with Rosie who went on a tirade about Sarah Sanders last week.

After a video showing Ivanka alongside her father in a discussion that included French President Emmanuel Macron, Canadian Prime Minister Justin Trudeau and other leaders was posted by a BBC reporter, Ocasio-Cortez shared it along with a tweet in which she questioned the presidential adviser’s qualifications.

Sanders, who recently stepped down from her role at the White House, fired back at Ocasio-Cortez and sang Ivanka and the president’s praises. This apparently got the attention of O’Donnell, who sent her own response directed at the former press secretary.

“thank god u r leaving the White House – may we never hear ur voice again – and leave AOC alone – she’s got all the things u lack – mostly courage and moral clarity – u sold ur soul Sarah – now u gotta live with that,” the former daytime talk show host wrote.

In her initial tweet, Ocasio-Cortez wrote: “It may be shocking to some, but being someone’s daughter actually isn’t a career qualification.

It hurts our diplomatic standing when the President phones it in & the world moves on. The US needs our President working the G20. Bringing a qualified diplomat couldn’t hurt either.”

The response from Sanders that prompted the celebrity to lash out read: “Phoning it in @AOC is wasting your time on Twitter while destroying jobs in NY. @realDonaldTrump & @IvankaTrump actually created millions of new jobs and continue to make the US stronger on the global stage but thank you for reminding Americans everyday why they elected Trump.”