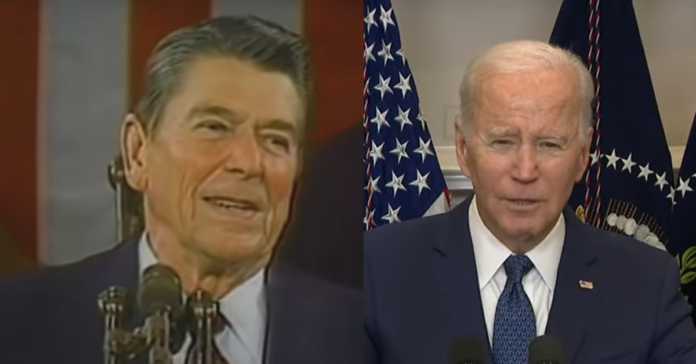 Former President Ronald Reagan was no fan of current President Joe Biden according to entries from Reagan’s diaries and Ron’s son.  The Reagan Diaries, edited by Douglas Brinkley and released in 2007, shows what Ron really thought of Joe.

Reagan wrote on June 15: “1st meeting with Ken D. & the V.P.—Howard late getting back from Tennessee. Some talk about Sen. Biden—now cand. for Pres. I saw him on CNN last night speaking to the John F. Kennedy School at Harvard U. He’s smooth but pure  demagog[ue]—out to save America from the Reagan Doctrine.”

Reagan wrote on March 6: “This modern age! Spent half a day in the office then by mid-afternoon I was addressing the Nat. Assn. of Evangelicals in Columbus Ohio, then at Dinner in N.Y., a Repub. $1000 ticket fundraiser & went to bed in the W.H. Before flying to Columbus, met with Sens. Bill Cohen & Joe Biden.

“They’ve been to Russia & are all wrapped up in ‘Arms Reductions.’

“I suspect that at least one of them (J.B.) doesn’t believe I’m sincere about wanting them.”

“The 1st meeting was last evening—highlighted by vitriolic attacks on TV by Sens. Kennedy, Metzenbaum & Biden.

“They really are a lynch mob.”

“After my father was out of office he shared with me that Sen Joe Biden confronted him and told him if he disagreed with my father on a Covert action he had planned he would leak it to the media to stop it.”

According to The Washington Examiner:

“Former CIA Director and Defense Secretary Robert Gates, who served presidents of both parties, famously said that Biden had been wrong about “nearly every major foreign policy and national security issue over the past four decades.”

“He was wrong to oppose the first Gulf War, when a U.S.-led coalition deftly kicked Saddam Hussein’s troops out of Kuwait.”

After my father was out of office he shared with me that Sen Joe Biden confronted him and told him if he disagreed with my father on a Covert action he had planned he would leak it to the media to stop it..

They still have hands and mouths..It will do no good.. General Population in Prison will take care of the problem…New Mexico lawmakers propose bill to chemically castrate pedophiles as parole conditionhttps://t.co/zhO8CWeS92