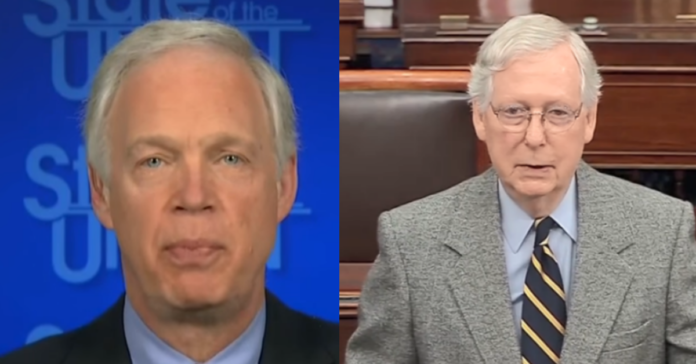 “I think it’s obvious that I’m target number one here,” Johnson told CNN today about his political future. “People are out to destroy me.”

Johnson next dropped a bombshell and told CNN that he wouldn’t support McConnell for leader again. “That’s not on the table, no,” Johnson said of backing Mitch McConnell for that key position. Johnson is the first Republican senator to publicly go on record saying Mitch has to go.

“I’ve always aligned myself with the people who supported Trump,” Johnson said of why he will back him again in 2024 if he runs. “That’s how I view it.”

Johnson is leading the charge against Biden’s new round of stimulus. The bill is almost certain to pass and it may cost him at home in 2022.

“We’re talking about $1.9 trillion,” said Johnson. “A stack of one billion dollar bills that would extend halfway past the distance to the moon. And we want to do this in a matter of hours? I don’t think that’s right.”

“This is an example of how Ron Johnson is not representing the people of Wisconsin, of how he is continuing to not be truthful and stand up for us, but rather trying instead to stand up for former President Trump,” said Alex Lasry, one of the many Dem lined up to take on Johnson.

Johnson’s spunk may come from the knowledge that he won his two Senate races on his own terms. In 2010, the wealthy plastics manufacturer from Oshkosh rode the Tea Party movement to triumph over three-term Democratic Sen. Russ Feingold.

He then beat Feingold again in 2016, when even some Republican strategists thought he was a goner. In 2022, Johnson could run in a potentially good election cycle for Republicans against the complete Democratic control of Congress and the White House.

“I want him to run,” said Sen. Rick Scott, a Florida Republican who chairs the National Republican Senatorial Committee. “I think he’s a strong candidate, and I think he’ll win.”

In 2016, Johnson said his second term would be his last, and in 2019, he said that his wife would prefer he retire.

After winning two seats in Georgia this year, Democrats now control the Senate, removing Johnson from a coveted position chairing the Senate Homeland Security committee, where he could’ve led oversight investigations into the Biden administration.

Mark Graul, a Republican strategist who ran George W. Bush’s 2004 winning reelection campaign in Wisconsin, noted that Johnson outperformed Trump in the suburbs in 2016 but said it’s “too early to say whether that would be the case again.”

But while his allies say Johnson is clearly the strongest Republican candidate, Graul said if Johnson decides not to run, it would give the party a chance to rearrange the path to victory, “to expand that coalition a little bit more, in terms of moving beyond just hopefully keeping those rural Trump voters, but also making some inroads back into the suburbs.”

"I'm target number one here," Johnson tells us. "People are out to destroy me"