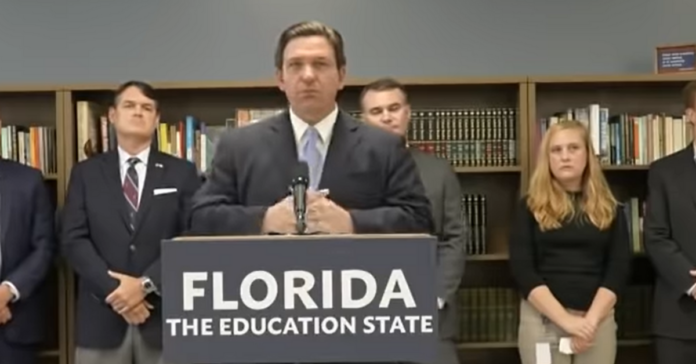 Florida Governor Ron DeSantis (R-FL) issued a warning to President Joe Biden that if he does not secure the border and stop sending migrants to Florida, DeSantis will look into sending them up north to Delaware.

He also took issue with Joe’s desire to pay migrant families separated under President Trump. Biden disputed the widely reported $450,000 payout saying it will be less but he doubled down on his belief they should be paid something.

Ron said: “The president has said that basically, they want to even pay reparations to people who came illegally, just think about that.

“You as an American, you get higher gas prices, you get higher grocery bills, you get told basically, to just grin and bear it, someone breaks the law, comes illegally, and they’re going to cut him a check for hundreds of thousands of dollars.

“That is just unbelievable.

“But that’s what we’re dealing with.

“My view would be, why don’t we, if they’re going to come here, you know, we’ll provide buses. “I will send them to Delaware and do that.

“I mean, if he’s not going to support the border being secured, then he should be able to have everyone there.

“So, we will do whatever we can in that regard.

“And we are absolutely going to do everything we can,” he said.

The Post reported that Yery Noel Medina Ulloa was arrested in early October in Jacksonville after he was found covered in blood and was charged with the death of Francisco Javier Cuellar, a father of four who had taken him in.

An ICE spokesman confirmed to Fox News that ICE had filed an immigration detainer on Oct. 13 on Ulloa, who it said was an unlawfully present citizen of Honduras, following his arrest in Jacksonville for murder.

DeSantis told “Tucker Carlson Tonight” that he is looking at a range of actions to target the companies facilitating the flights into the state.

“We’re looking at what we can do. I think that they use these private contractors. So what we’re looking at is how can we fight back against the contractors. We can obviously deny them state contracts, which we will do. Can we deny them access to Florida’s market generally? Can we tax them? Can we do things to provide disincentives so they can’t do it? So we’re going to do whatever we can to do it,” he said.