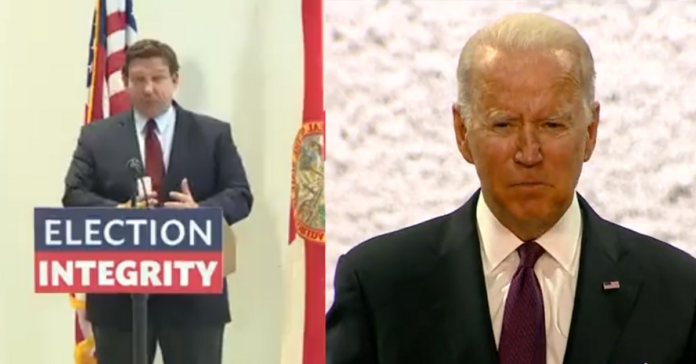 Ron said: “You look at the things going on. You see Big Tech. You see corporate media. They weren’t very happy with Virginia last night.

“You look at that you look at what’s going on with some of the big corporations with their woke agenda. When you look at the Biden or Brandon administration,” he added as the crowd erupted into the  chant sweeping the nation, “Let’s Go, Brandon.”

“It was at a NASCAR race and they’re doing an interview with the driver. I guess his name is Brandon. And the crowd starts chanting very colorful language about Joe Biden.

“And it was obvious what they were doing, and you know. It is what it is,” DeSantis said before adding that the left said “way worse about Trump for four years.”

He continued: “We know that. But so they’re chanting this, and you have a reporter from NBC who knows that’s what they’re saying, and she’s trying to cover for Biden so she says, ‘Yeah they’re chanting Let’s Go, Brandon.

“That was a lie so this chant, I think, has taken on a life of its own because it exposes the dishonesty of corporate reporters.

“But bottom line, we’ve got a lot of things we’re facing. We’ve now seen after Virginia, people are willing to fight back.

“What we need now more than ever with all the stuff that’s going on, is we need people to stand for the right things, but they need to stand up and they need to display courage and backbone and not back down in the face of all the things we have to deal with.

“We don’t have the time for boneless wonders right now.”

Can I get a #LetsGoBrandon ????? @GovRonDeSantis pic.twitter.com/wyiAvmyFZ1