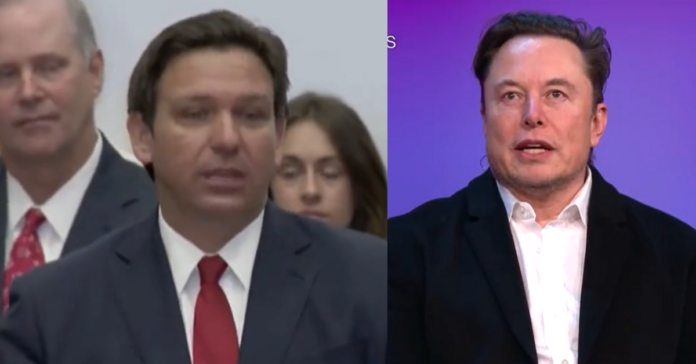 Gov. Ron DeSantis (R-FL) sided with Tesla CEO Elon Musk in his battle for control of the social media platform Twitter. But Ron just didn’t side with Musk, he issued a threat to the Twitter Board after it activated a “poison pill” plan to try to block  Musk’s purchase.

He said: “I can just tell you, the State of Florida, in our pension system, we have shares of Twitter. I didn’t buy it, we have people that run the fund. Nevertheless, it hasn’t exactly been great on returns on investment. It’s been pretty stagnant for many, many years. So, nevertheless, to me, I think that’s probably an injury to the fund.

“We’re going to be looking at ways that the State of Florida can potentially be holding these Twitter board of directors accountable for breaching their fiduciary duties. So stay tuned on that.

“They were censoring accounts like the ‘Babylon Bee,’ which is a satirical site. But they don’t like it because, you know, it’s satire but it cuts and they don’t like when people are effective like that.

“We’re gonna be looking at ways the state of Florida potentially can be holding these Twitter board of directors accountable for breaching their fiduciary duty.” pic.twitter.com/55OFO90AjJ

“And so you saw how it had been really used to control the narrative, not to give the ability of people to speak their mind.

“They advertise themselves as being a platform dedicated to the free expression of ideas and yet, you know when you have a New York Post article about Hunter Biden, what do they do? They take it down. They lock the New York Post’s account.

“I don’t want to expend resources just to kind of be able to send out a press release or something.

“I mean, we really want to feel like we have a solid theory to be able to win.

“But I can tell you just looking at it, most of the time the people I talk to would say if you’re on the board in that situation, you really do need to sell.

“It’s a massive return for your shareholders.

“I mean, most people and their investment vehicles are not making 20% in a year.

“They rejected it because they know they can’t control Elon Musk.

“They know that he will not accept the narrative and that their little play toy of Twitter, it would not be used to enforce orthodoxy, and to basically prop up the regime and these failed legacy media outlets.

“And so that’s why they did it. It was not, in my judgment, because it wasn’t a good business deal.

“They advertise as being open platforms.

“They advertise as you being able to express yourself and communicate with other people, and yet, their censorship decisions and deplatforming decisions are based on viewpoint discrimination.

“What Musk is trying to do is basically liberate it from being an agent of censorship into making it an actual open platform like it’s advertised.

“We’re going to look at all that in terms of what can we do statutorily to say, ‘Here’s where we don’t want to go for investments,’” DeSantis said.