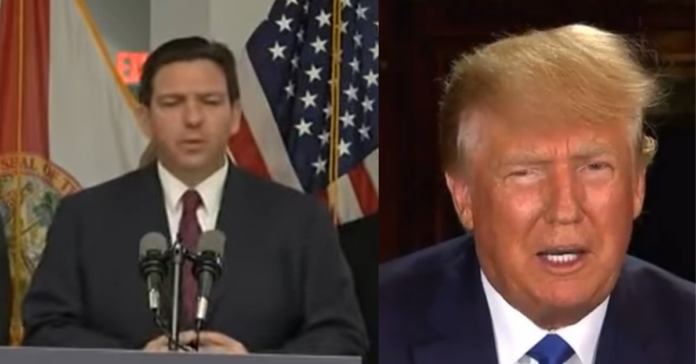 Florida Governor Ron DeSantis fired the first shot in the coming battle for the 2024 GOP nomination with former President Donald Trump. DeSantis of course did not mention Trump by name, just like Trump did not mention DeSantis when he ripped ‘gutless’ politicians who refuse to tell voters their vaccination status.

DeSantis went on the Ruthless Podcast and when asked about his one regret in dealing with the pandemic in the early days he gave a very telling answer. He said his one regret was not speaking out more forcefully against lockdowns under President Trump.

“When COVID was first coming, and we were actually engaged in it, I was telling Trump to stop the flights from China because we didn’t know what we were dealing with.

“I never thought in February– early March that it would lead to locking down the country. I didn’t think that was on the radar.

“I had Pence and the CDC director down in Port Everglades talking about cruise ships the second week of March and no one was talking about shutting down the country.”

Gov. @RonDeSantisFL and a thousand Floridians join the variety progrum for a major interview in St. Petersburg, FL.

“And I think if knowing now what I didn’t know then if that was a threat earlier, I would have been much louder about [saying lockdowns were a bad idea].”

Look, we don’t know if Trump or DeSantis runs in 2024 but what we do know is unlike the Dems who install their leaders (Kamala Harris, Hillary Clinton, Joe Biden) the GOP elects the best candidate. Jeb Bush and others learned that lesson the hard way in 2016.

We want a tough fight because the winner will face a desperate Dem Party in the general election. The Dems will go nasty early and often in 2024 because they have failed so badly under Biden they can’t run on anything other than demonizing the other side.

And if you think that is what they have always done they are about to turn up the volume like you’ve never seen. It’s all they got. It will not be pretty but the media has lost so much credibility it will not be as easy as it used to be for them to spin away Biden’s failures.

So whoever wins needs a thick skin and needs to be a fighter. We know Trump is, we will soon find out if DeSantis is as well.

According to Louder with Crowder,

Ron DeSantis’ one regret was not speaking out about lockdowns when they were first proposed. Under President Donald Trump. I believe this is what the kids refer to as one of them “clap backs.”

What it does is set up a veeeeeeery interesting debate. Donald Trump is adored by Republican primary voters, while the Fauci Ouchie is not.

Trump’s first attack is that “leaders” aren’t being honest about getting the shot. DeSantis’ first “attack” is the one area Trump is most vulnerable among the GOP base. The fact that lockdowns were even a thing, to begin with.

Where primary voters go or who they side with is anyone’s guess.

“But honestly, Roberts and Kavanaugh did not have a backbone on that decision. “That’s just the bottom line.

“So here’s what’s going on, think about how insane this is.

“Now, in Florida, we protected the nurses, so we have people that are working. But in other states, they fired nurses who were not vaccinated.

“So they have COVID-positive people back on, meanwhile the unvaccinated, likely immune through prior infection, healthy nurses are on the sidelines fired.

“How insane are these policies?”

We've got @GovRonDeSantis on a special episode tomorrow!

DeSantis says one of his biggest regrets was not speaking out "louder" on Trump admin calls for lock down during the pandemic. "And I think it knowing now what I know, then if if that was a threat earlier, I would have been much louder." About 32 mins in: https://t.co/HaR1MOfHWY