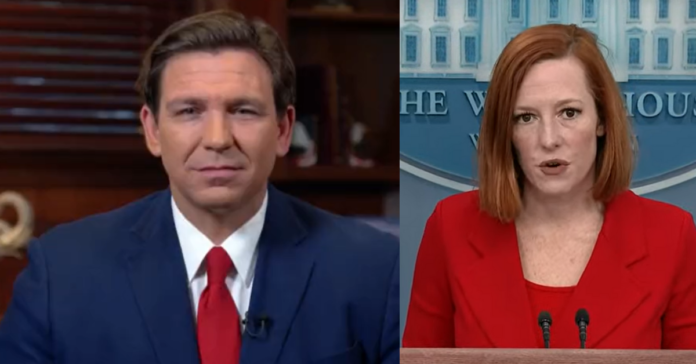 Florida Gov. Ron DeSantis called out White House Press Secretary Jen Psaki accusing her of lying ‘through her teeth’ about Florida and the job he is doing as governor of that great state. DeSantis said at a press conference Wednesday:

“The White House press secretary stands in front of that podium and lies through her teeth every single day, and usually about the state of Florida.” Psaki has taken an extraordinary amount of shots at Governor Desantis and the state of Florida recently saying:

She continued: “Now, part of it is you have to write a plan for how you’re going to keep schools open to get the third tranche of money, and some have been delayed in that.

“But, right now, that’s an example of a state that could do more.

The Biden Administration’s decision to revoke access to monoclonal antibodies was made with complete and utter disregard for the thousands of sick Floridians who were left scrambling to find an alternative treatment.

These Floridians should be able to access these treatments. pic.twitter.com/rYWfhujGqA

“Well, let’s just take a step back here just to realize how crazy this is,’ Psaki said earlier about Florida and DeSantis.

“That is what the scientists are saying.”

DeSantis issued a statement that said:

Today, Governor Ron DeSantis held a roundtable with doctors and patients who have recently received monoclonal antibodies now banned by the Biden Administration to highlight the real-world clinical success of these treatments.

On Monday night, Biden’s Food and Drug Administration (FDA) unexpectedly revoked the emergency use authorization (EUA) for the Eli Lilly and Regeneron monoconal treatments. As a result of this abrupt and clinically unsupported action, the appointments for more than 2,000 Floridians to receive monoclonal antibodies were cancelled.

“This decision was made without clinical data and without any advance warning to states and medical providers, leaving sick Floridians scrambling to find an alternative treatment,” said Governor Ron DeSantis.

“Thousands of Floridians, who were already in the system and waiting to get treatment, woke up to an email saying that these treatments were now prohibited.

It is fundamentally wrong and not the way we should treat people in this country.

Our view in Florida is that we want doctors to be able to administer this treatment and patients to be able to access it, and they can make their own decisions from there.”

“Monoclonal antibodies have been at the forefront of treatment for COVID-19. It is a very well tolerated and scientifically proven treatment against the virus,” said Dr. Kenneth Sheppke, Deputy Secretary, Florida Department of Health.

“The value of monoclonals cannot be understated in the ability to treat people with this disease.

We have two pieces of conflicting data, we have this study on cells that suggests it might be less effective against Omicron and we have real world experience in humans where we have seen really excellent outcomes.

Floridians and the rest of the nation have come to expect the availability of these treatments and it is really important for us as physicians to have those tools at our disposal to make the decisions on what treatment is best for patients.”

Governor DeSantis is in Miami hosting a roundtable at a monoclonal antibody treatment site that was forced to close because of the Biden Administration. https://t.co/fH9XrP13MI