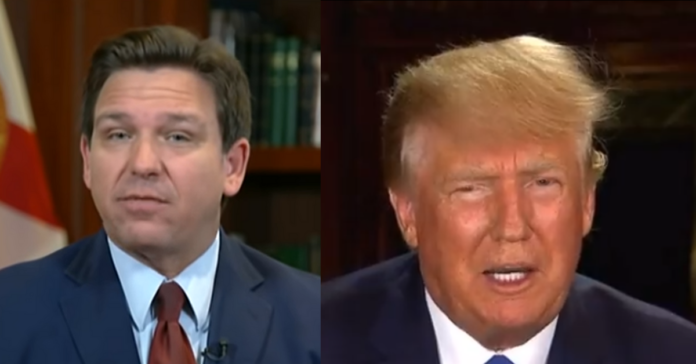 Florida Gov. Ron DeSantis (R) broke his silence on media reports claiming that his relationship with former President Donald Trump is on the rocks. Desantis called the reports ‘total bunk’ before saying ‘Trump is a friend.’

Ron said: “Donald Trump’s a friend of mine. He is proud when people do well, and it’s not just me, but obviously, he’s a Florida resident, and he appreciates the job that we’ve done. He’s told me that many times, not only with helping with the election, but just how we govern the state.

“He wants to see Republicans doing well. And I think when media is trying to act like he’s upset at me for doing well, I think that’s total bunk. I think they’re just making it up.

“And I think he’s somebody that wants to see, you know, not just Republicans do well, but people that are actually going to stand and fight do well across the board.

“Obviously, Florida is an important state, the third-largest state in the country, and really us and Texas are the two biggest states that have sizable Republican footprints, and so we’re proud of that, and we’re going to keep it going.

“No. I mean, look, I think that what they’re trying to do is they’re Biden…They did all they could to get Biden elected. OK. They lied about Trump for four years.

“They did everything they could to get Biden elected, the guy who campaigned from his basement.

“They never asked any questions about that. Well, now he gets in. And he had a disastrous first year as president said the worst first year president of any president since the 1800s.

“People compare him to Jimmy Carter. Carter was much more successful his first year than Biden has been.

“Understand what they’re trying to do. We need to be united and say we don’t like what the Biden administration’s doing. We offer a better course in Florida. I think other Republican states are offering a better vision in their states as well. And let’s go into ‘22 with a full head of steam with everybody united on the same team.

“We want people that are going to fight the left, and that’s what we need to do in this country.

“To act like the main issue in this country is things that happened over a year ago. I can tell you in Florida, that’s not what Floridians are concerned about.

“They’re concerned about inflation and gas prices. They’re thankful that Florida’s a free state, but they look around the country and see how fragile freedom is.

“They’re thankful we’re a law and order state, but they look around and see what’s happening in a lot of these cities where crimes are spiking.

“So I think focusing on the issues and showing that we stand for things that matter to people is the way forward.

“To have a vendetta against Donald Trump and to constantly be bringing this up is just not something that I think Republican voters are interested in,” he said.

The Biden Administration’s immigration policies have created a human smuggling operation that has increased human, sex and drug trafficking.

Proud to join with Cuban-American exiles to oppose these reckless policies. pic.twitter.com/7orhWkRzQY