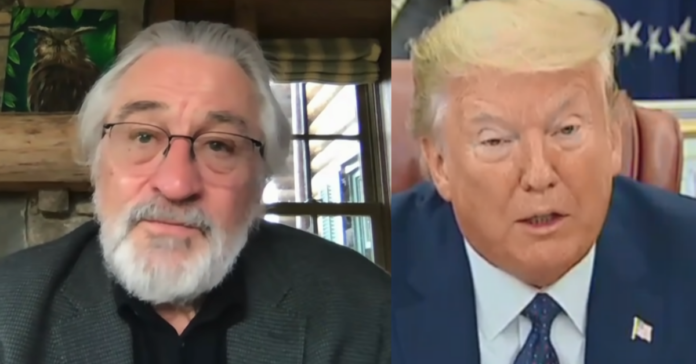 New leaked documents should upend the Russia Trump 2016 conspiracy on its head and bury it to the far corners of Rachel Maddow’s imagination forever.

First, consider who is doing the leaking – Buzzfeed and they are no friend to Trump. Second, what the leaked FINCEN documents prove is the swampy back and forth between the rich while they play us for suckers.

It should not surprise you to find out that one of the leaders of the anti-Trump brigade, Robert DeNiro, had a business relationship with a Russian oligarch at the center of the BS story.

Aras Agalarov and his son set up the infamous Trump Tower meeting and it turns out that he is a business partner of DeNiro through Bobby’s Nobu sushi empire.

It gets worse, the feds flagged 600,000 in payments from Agalarov to Nobu. So the whole time the country was in this hysteria of whether Trump was in cahoots with Putin, DeNiro was really in cahoots with one of the guys Trump was wrongly accused of working with. You cannot make this stuff up. The media failed, plain and simple.

The reporter who broke the story Jason Leopold describes it this way:

Rhodes told BuzzFeed News he knew that First Republic might not be happy about the third-party payments. And by the time Nobu Crocus City opened in November of 2015, investigators from the bank spotted more than $200,000 in payments they deemed suspicious.

In an August 2015 report, First Republic Bank sent to the Treasury Department, Nobu’s corporate controller, Merrick Rhodes, reminded Crocus International in an email that payments needed to be sent from the company’s account and not through other companies.

The documents do not suggest that De Niro himself was involved in or even aware of these financial irregularities, and they do not fault Nobu, which the bank referred to as “non-concerning.”

Agalarov is an unlikely business partner for a hospitality empire cofounded by Robert De Niro, who is an outspoken critic of Donald Trump. Agalarov was a key player in the 2016 Trump Tower meeting where senior members of the Trump campaign expected to get dirt on Hillary Clinton.”

Exquisite sushi, a celebrity chef, and glamorous clientele have made Nobu, a restaurant and hotel empire with more than 40 outlets in 20 countries, one of the world’s most famous luxury brands.

But one aspect of the chain’s expansion has so far remained a secret: Nobu accepted more than $600,000 that its bank deemed suspicious, as part of a deal with a close associate of Vladimir Putin who also has strong ties to the White House.

That associate, the billionaire Russian real estate developer Aras Agalarov, was a key figure behind the 2016 meeting at Trump Tower where senior members of the Trump campaign expected to receive dirt on Hillary Clinton.

Agalarov’s company, Crocus International, runs two Nobu restaurants in Moscow, one in the heart of the city and a second in the glittering Crocus City megamall, site of the 2013 Miss Universe beauty pageant that Donald Trump ran. Confidential government documents reveal, however, that for a time, Crocus International paid Nobu’s hefty licensing fees through untraceable offshore companies, which experts say are a red flag for possible money laundering.

The arrangement led the bank’s investigators to threaten to stop accepting the payments entirely. Some came through a Latvian bank that has since been shut down due to its involvement in a Russian money laundering scheme.

The suspicious banking transactions were sent to the US Treasury Department’s Financial Crimes Enforcement Network, known as FinCEN. They were compiled, along with thousands of pages of other records, in response to requests by the Senate Intelligence Committee as part of its inquiry into Russia’s interference in the 2016 presidential election. The Nobu documents, revealed here for the first time, provide additional information about the Agalarov family, whose business dealings were discussed in the Mueller report.

The documents are part of the more than 2,100 suspicious activity reports, or SARs, that BuzzFeed News shared with the International Consortium of Investigative Journalists and more than 100 news organizations around the world as part of the FinCEN Files investigation. By law, banks must file these documents when they detect the hallmarks of money laundering or other financial misconduct. SARs are not in and of themselves evidence of a crime, but they can support investigations and intelligence gathering.

The FinCEN Files also open a window onto the scope and scale of the dirty economy. They show suspicious transactions from untraceable offshore companies, like the ones that Crocus International used, located around the globe. From Hollywood entertainment to Venezuelan public housing, almost no part of the world’s economy is untouched by this shadow financial system — not even the A5 Wagyu beef that Nobu serves, rare, for $38 an ounce.

The documents do not suggest that De Niro himself was involved in or even aware of these financial irregularities, and they do not fault Nobu, which the bank referred to as “non-concerning.” https://t.co/Jkzx2YFsdx